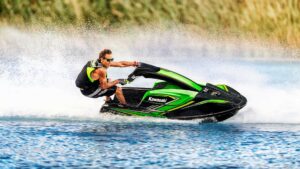 Karken is one of the largest cryptocurrency exchanges in the world. Karken has over time been working towards the growth of the market place for cryptocurrency and help investors in trading process without any complexities as the company also provides trading between cryptocurrency and fiat currency.

Karnken’s CEO Jesse Powell, recently announced a new policy for the personnel of the company. The Policy was called “Jet Ski Policy.” The company acknowledged that the employees have time until the 20th of June, to take part in the program. The program basically offers the employees to leave Kraken with a salary of four months, who don’t agree with the company’s values. The name of the policy intends to communicate that, the employees leaving should feel as if they are in an adventure and hopping on a jet ski.

Internal Turmoil in the company.

According to many reports, there are a lot issues, miscommunication happening inside the company between the internal team. If the rumors are to be believed, then it is said that the employees are hurt because of the comments made by the CEO.  The comments around preferred pronouns, demeaning statements towards women, are among the comments which did not go down well with the employees. The employees also recited that; Powell held a company wide meeting on June 1st announcing the Jet Ski policy.

“Kraken Culture Explained,” was a 31-page document, positioned the program as a recommitment to the company’s core values. According to the reports, the personnel of the company had time until 20th of June to participate in the buy-out.

One of the executives of the CEO further added that, the CEO, the company and the culture are not going to change in a meaning full way, implying the work force to find another option for work environment which doesn’t disgust them.

In regards to the policy charted out by Powell; he is not the only one to do so. Tesla and SpaceX CEO, Elon Musk went on to comment similarly. He said that ‘woke mind virus’ is hurting the business of OTT giant Netflix, which also happened to share cultural memo in the month of May.

In this case, one of the contents streamed by the channel did not go down well with the employees. The company asked the employees to quit if they didn’t agree with the content that it showcases. The topic of discussion in this instance was, Dave Chapelle’s Program, theming around transgender, which received a lot of backlash and criticism.