Mark Zuckerberg is a person who needs no further introduction. The CEO of Facebook has made an unshakeable place for himself in the tech domain with his milestone innovation. Facebook which started as a connecting platform between universities soon assumed a global stance and there was no turning back. After sophomore year, the young man who left college to dedicate all his focus towards the newly developed website soon evolved to become an important part of technological history. He is also well known for his down-to-earth personality apart from the wide conspiracy theories. After all, people do not need any particular reason to spin out conspiracy theories. And speculating whether or not the Facebook CEO is a robot or alien seems like an interesting pastime. 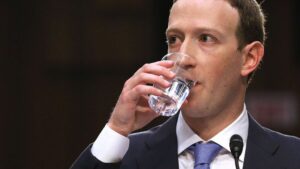 Being at the top of a globally acclaimed company means a constant appearance in interviews and talk shows. And it is only normal that at times even the best of us exhibit a mildly awkward part of our personality. Here are some interview moments of Zuckerberg that are worth taking a look at. (Definitely, the senate hearing trumps all the rest particularly because of the wonderfully malleable questions asked).

1.When It All Began

This CNBC interview portrays a Zuckerberg with all the college boy aura who just cracked the code to success. The solemn look and tone of young Zuckerberg might be a veil to the slightly nervous youth underneath. And what’s funny now is the interviewer’s question, “Does it make any money?” Seems like it does!

Comedian, Jerry Seinfield had a candid conversation with Zuckerberg, and apparently, people are of the opinion that it is one of the most awkward interactions. Seinfield insisted on knowing every minute detail and the Facebook CEO would have been justified to feel a bit weird. However, what is more hilarious than the interaction are the comments below the video where people are going all out with the assumption that Zuckerberg is a robot. In all honesty, his slight awkwardness at being asked about what he does after getting out of bed might or might not mean something.

3.Not The Funniest Of People Out There

A good sense of humor might not be the strongest point of the Facebook CEO. But definitely, if there is an award for the most cringe-worthy jokes, Zuckerberg would easily nail it. During the 2017 F8 Facebook conference, Zuckerberg decided to start the event by tickling the audience’s funny bones. And he ended up laughing at his own jokes. Once again what proved to be funnier than his jokes was the comments section wherein people went on to say “It is a blessing that robots don’t feel embarrassed.” The robot conspiracy is definitely here to stay.

4.The Awkward Conversation With Astronauts

Well, another to the list of awkward conversations is Zuckerberg’s tete-a-tete with astronauts. Although the prospect sounded pretty cool, it looked like the ‘space’ between them was rather huge. With awkward pauses, late replies, and Zuckerberg’s “what have I gotten into” expressions, the conversation made it to the awkward list pretty easily. The astronauts playing with the mic like five-year-olds did not help either.

5.Nope, Not A Lizard Person

Well, no matter what people say, Zuckerberg does know how to take a joke well. One of the wildest conspiracy theories about the Facebook CEO is that he is actually a lizard. And during an interview, it can be seen that Zuckerberg was enjoying these theories and even went on to say that he is not a lizard person. Although many people were of the opinion that no lizard person would accept that in public. Some people really can’t get Dr.Curt Connors from Spiderman out of their heads.

Mark Zuckerberg might have had a lot of awkward and uncomfortable moments in life. But nothing would have equaled the Senate hearing at Capitol Hill where he had to take basic lessons for the congress about the internet. It is still not clear whether the ridiculously child-like questions sprang out of genuine curiosity and lack of knowledge or if the congress was actually hell-bent on making the Facebook CEO feel cornered on all sides with kindergarten students with no understanding about how the internet works. Well, let’s say Zuckerberg might have achieved a great lesson in patience that day despite being grilled to the core.

The Congress hearing did inspire a flurry of memes that are worth looking into. After all, anything that makes way for a good laugh is in for a warm welcome.

me when I realize my actions have a consequence pic.twitter.com/kNx4rL2uGl

when everything's fine and you feel great pic.twitter.com/d8wenWQfd5

“Mr. Zuckerberg, a magazine i recently opened came with a floppy disk offering me 30 free hours of something called America On-Line. Is that the same as Facebook?” pic.twitter.com/U7pqpUhEhQ

“Mr. Zuckerberg, I have just one question about Facebook: Where do I find my Hotmail?" pic.twitter.com/51f5cxnJiq