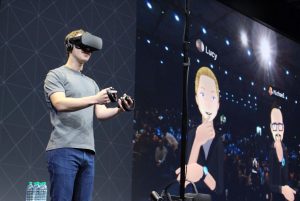 The plans in store for the improvisation and development of virtual and augmented reality was propounded by Zuckerberg in a podcast interview with The Information. He talked about the promising future versions that enables face and eye tracking, thereby ensuring better communication and social presence.

He went on to talk about about the significance of consistent hardware changes which is the focal point of avatar building. The working rule behind the proposed design is to ensure better social experience by packing in more sensors. According to Zuckerberg,

When I think about where you are at with VR today, you go into the experience – there are some pretty good games and different experiences. But I’d love to get to the point where you have realistic avatars of yourself, where you can make real authentic eye contact with someone and have real expressions that get reflected on your avatar

Apart from the innovative and much acclaimed VR headsets, the company also launched, ‘Avatars’, a new feature that enables the user to create a unique digital persona that is representative of the user. Among the intriguing features of ‘Avatars’ creator is that it facilitates customization, which has always been a point of attraction for users. It enables the users to represent themselves in a variety of ways with respect to facial features, outfits and hair.

In addition to the existing iterations of VR avatars released this year, Zuckerberg assures another generation of avatars on its way followed by more realistic versions. Authentic eye contact and displaying the user personality are the primal points of focus of the Avatars. Epic’s MetaHuman tool that generated highly detailed virtual faces are in par with Zuckerberg’s ideas with the exception that he intends large scale generation of these avatars using machine learning.

The success of Oculus in the VR landscape is being augmented by envisioning newer versions; “Quest 3 and 4” hardware. This attests tp the future development and scope of Quest standalone VR design. In short, the company aims to fuel Oculus VR headsets to enable an immersive real life experience.

This year will also witness the launch of a pair of smart glasses, indicating the company’s keen interest to explore domains of augmented reality. However, they won’t have the standard visual AR elements.