Marketwarket Is An Online SuperStore Founded By Two Engineers From Amravati !

The idea took its shape, bit by bit!

Pushpak Deshmukh always had a dream to do something on his own, he never had imagined to do job at any company or work for any other person.

On day of Annual Function of his college in January 2011, Mr.APJ Abdul Kalam was the Chief Guest. In his speech, he mentioned to become an entrepreneur and create job. Voila!  That was the moment which sparked entrepreneurial spirit in Pushpak.

Pushpak’s mind was boggling unceasingly. After a few days, he came across an idea to put all the city’s doctors online or bring all electrician, plumbers, carpenters etc. online to provide home maintenance service.

Meanwhile, whenever there was a need of grocery at home, Pushpak was the one who used to suffer for grocery shopping each and every time. Pushpak always wished there was someone who would deliver all his grocery at door in short period. In those days e-commerce was booming in India, he thought why to wait for someone to deliver grocery at his home, why should not he deliver it? That is how his other idea of an online grocery store took its shape.

Pushpak shared all these business ideas with one of his colony friend who agreed to work with him. All these things were happening in 2011.

In January 2012 after somewhat research & study with basic PPT ready, both went to TIE Nagpur to find mentorship guidance. But officials in TIE Nagpur’s office rejected both the business ideas saying that, “These things are not possible/practical, these fields never exists” and declared them  quite young to do things”!! After hearing the answers of TIE Nagpur’s officials, his friend refused to work further on the concepts and walked out.

Few weeks later, Pushpak was sitting on roof top of his house with his friend Prashant and described him above activities. Pushpak offered Prashant to join as a partner. After hearing all the ideas in detail, going through concepts, he agreed to work with Pushpak on the idea. From the two never turned back. After too many late night meetings, discussions they came across final decision to start an online grocery store in Amravati – Marketwarket.com!

The Milestone of entrepreneurial journey

Just a promising idea does not make you an entrepreneur. What comes next is where your abilities are assessed. Execution of the idea takes an equal effort to get there. For Pushpak and Prashant this next phase was more difficult than expected for they decided to centre their business operation in Amravati, Maharashtra. Vidharbha is the eastern region of the Indian state of Maharashtra, comprising Nagpur and Amravati Division. Vidharbha region of Maharashtra is considered as backward region where people are struggling for electricity, Drinking water, Employment and other basic amenities. Vidharbha is also infamous for worrying number of farmer suicides.

When they launched marketwarket.com, there was not a single e-commerce website working there.

“While launching we have made ourselves ready for challenges and obstacles we were going to face. Here, marketing strategies are different from other big cities. We are using local Marathi language to highlight our concept at most of our campaigns. We had used ideas like Auto rickshaw banners, co-sponsored local cultural events, and distributed flyers door to door” says Pushpak.

Unlike metro cities, online advertising had limited reach in small cities and towns. Mostly young generation uses internet where most of the use is for social sites & android social apps. But in past few years mobile penetration has introduced e-commerce rapidly. They were to use better & effective options to spread service. Other difficulty was people who were using e-commerce sites were not ready to pay before. They choose COD option. Initially, MarketWarket received most of its orders just because of word-to-mouth advertising by existing customers.

When asked why did both choose to start their venture in a region like Vidharbha, they defend by saying that there are several reasons to start e-commerce in Vidharbha region like, low expenses, inexpensive man power, small cities (with concern to delivery and marketing costs), high customer loyalty etc. With accurate planning and accomplished sales target, start-ups can be profitable here.

MarketWarket has been able to achieve its expected customer base in short time span. Both are aware of the fact that MarketWarket is not growing rapidly like other big players but they are making footprints of e-commerce in Vidharbha region where they already have 95% returning customers and consider as a huge milestone to their growth.

Both the founders Pushpak Deshmukh and Prashant Mahalle are engineer of Electronics & Tele-communications stream. Born in the village, both of them belong to middle class family with an agricultural background. They shifted to city from village for different reasons like education, father’s job etc. Both met in the 1st year of their engineering life for the first time.  The two are 23 years old and like-minded people who always wanted to be job creator and not job seekers. 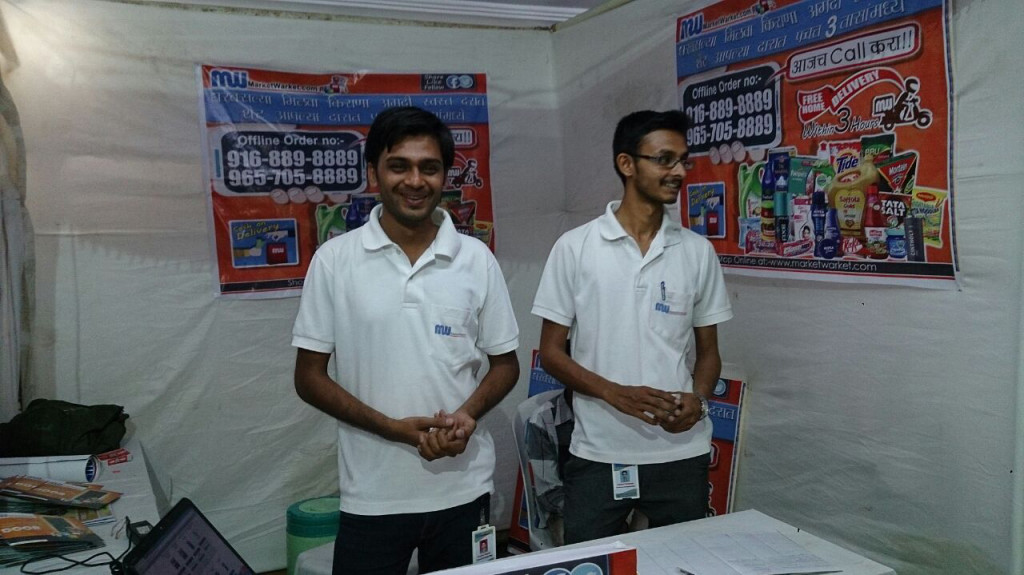 MarketWarket has a team of 4 other young colleagues from other engineering fields. Both of them don’t have any company work experience. They are working to build MarketWarket from last three years.

From the launch in 2014, MarketWarket has targeted the class of people using retail mall to fulfill their grocery needs. The city is equipped with 2 Retail malls and a wholesale mall. So, from the start, people had compared them with the wholesale mall and not with retail stores. Also, the middle-class government and private sector employees are the secondary target they have focused on. Recently, they started to provide special packages for institutional clients in their city.

Indian e-commerce market supposed to touch USD six billion by the end of the year. With the increasing breadth of Internet and Smartphone reach in the country, the penetration of e-commerce is believed to grow at close to 51 per cent. MarketWarket with its focused customer base is looking forward to expand their service in other cities as well.

As of now, the number of registered customers till date is 1500+, and the average amount of an order is Rs.1450. Currently, they are operating only in Amravati city. Their current team includes two co-founders + 4 other people + delivery boys (all are working for full-time with MarketWarket). Their revenue model is purely inventory base warehousing model. Being vertical business model it has its own pros like service accuracy, service/product quality assurance, Compete with market over prices etc. They have other plans in pipeline to increase revenue which they would bring in effect after funding.

The Moments of Learning

“We are learning everyday. Every new day comes up with new challenges and that is an integral part of an entrepreneurship. Special thing we learned is, one can become a successful entrepreneur only if he perseveres and stays focused” says Pushpak.

The company is operating in Vidharbha region, where internet penetration is low as compared to regions where big players like Bigbasket.com are doing their business.

“Ongoing online frauds happening at big players get published by media and people read/hear them and hesitate to trust small players like us. Doing business in Amravati has its own challenges” Pushpak explains.

There are moments when people ask them if they sell stolen products? If they sell expired products?

At moments, there are remarks like “Ohh!! Discounts & free home delivery then you must not be paying your taxes”.

While they were tying up with FMCG companies, it was hard to convince local company distributors to supply goods as in 2012, the concept was new for them.

Along with these, People started compare them directly with two retail malls for price and product quality. They have struggled so hard to maintain that product quality and price comparison point from their side. Maintaining a supply chain to deliver a wide range of products on time at competitive prices involves considerable operational complexity. Besides, grocery items are a low margin category, without much scope for large discounts.

The concept is new to people of Amravati, so they are struggling hard to make them understand benefits.

Moreover, price is never the only reason people buy. They have full control on products which are packed by them and that helps them keep a check on quality.

“We are not doing just business, we are building relations with our customers. We serve them, care for them. Many of them know us and our team by our names. Besides all these we believe in running a successful business is not about having a unique product or service; it’s about making your product/service stand out even in a market filled with similar products” Pushpak smiles.

The Moment of Joy

The moment of joy happened when founders were approached by business individuals and NRIs with investment proposals. However, they did not go forward as both are looking for experienced team of investors. They are looking for funding to make their product more user-friendly, app development, talent hiring and technology integration along with expansion in other cities.

In nearby future, they are planning to launch their service in other cities. Introducing their own products/brands is also on the list.

Suicide of farmers is serious issue for Vidharbha. As they are also from agricultural background, they have started to help farmers by integrating farmers directly for staple food and other items.

Along with e-grocery, MarketWarket will be launching other services to strategically fit into their tagline “Groceries and more right at your door”!