Forget Apps ! Message Bots Are The Future of Customer Engagement ! 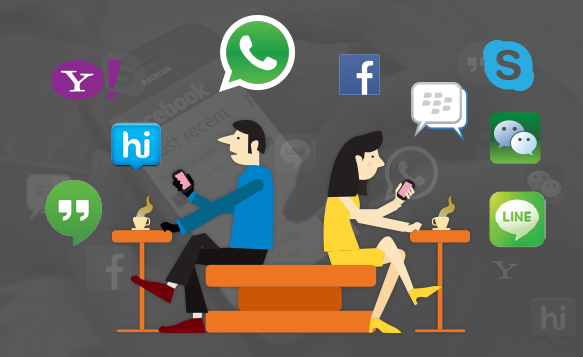 The current mobile app paradigm is reaching its limit. Consumers are overwhelmed by the large number of apps. While there are millions of apps, an average consumer uses barely a handful of apps every day. The small screen makes it hard to discover, download, use and switch across a large number of apps. As developers continue to spend enormous amount of energy developing apps, it’s becoming increasingly harder to acquire and retain users. Is there an alternative for the mobile developer?

Yes, there is. The alternative is emerging in the form of a new mobile paradigm that is rapidly gaining traction: Messaging is the new platform. Bots are the new apps.

The messaging app is the most popular app on smartphones today. In an emerging trend, messaging apps are expanding scope to now subsume other services that were previously independent apps. For example, Wechat, the Chinese messaging app, and Line, the Japanese messaging app, and Facebook Messenger are gradually becoming full-fledged platforms. The Wechat and Line messaging apps, nay platforms, enable users to shop, order pizza, book a taxi, do banking, send payments, and just recently, even stock trading. Users have adopted these trends in a big way. Wechat did over $100 million in e-commerce sales on Singles Day (China’s biggest shopping day), books over 20 million taxi rides a month and over $1 billion in 2014 revenues through gaming.

These trends are playing out on the enterprise side as well. Hipchat enables bug tracking and task management along with messaging. Slack integrations enable imported events from numerous 3rd party systems. Telegram has launched APIs for creating messaging bots.

Our app, Teamchat, has taken this idea to its logical extreme. Teamchat pioneered two new ideas: “smart” messages and messaging bots. Messaging bots are computer programs that read and write messages, just like human users. However, messaging bots can automate workflows and provide advanced services. To make messaging between bots and humans easier, Teamchat introduced “smart” messages. Unlike plain-text messages, smart messages are structured entities that can render themselves and respond to user actions. Smart messages make communication unambiguous eliminating the need for natural language processing, which is not as reliable. With smart messaging and messaging bots, enterprises can automate business workflows such as sales tracking, lead management, approval workflows, retail operations, attendance monitoring, social commerce and much more. To enable sharing and reuse of bots, Teamchat introduced the world’s first bot store.

Today, virtually all of ERP, CRM, HRMS and other enterprise processes can be enabled on messaging platforms. The backend systems may still remain the same, but the front-end user experience can be simplified and unified within the messaging app.

These trends open up new possibilities for mobile developers. They should now build bots instead of apps. Bots involve server-side code that is faster to develop, easier to maintain and is platform-independent. Bots offer the same advantages over apps that web pages did over desktop apps. Developing bots can substantially reduce time to market for emerging startups. Iterating over bot code is much faster, enabling developers to reach product-market fit sooner. Bots offer tremendous benefits to the end-user too. She doesn’t need to download yet another app – she can use the service right in her messaging app. Also, it is more natural to communicate via messaging rather than using custom interfaces. Consequently, customer acquisition and retention becomes easier for mobile developers.

Mobile developers and investors will find it more productive to spend their resources developing bots rather than apps. Early movers will find themselves rewarded handsomely by customers as the mobile paradigm shifts toward messaging platforms and bots.

The article is authored by Mr. Mr Beerud Sheth. Mr. Sheth is the founder and CEO of Webaroo .Webaroo  has recently come up with its second product , the Teamchat platform, which is a Whatsapp type messenger for enterprises.