Miami Is Emerging As A Hub for Cryptocurrency, Now DJ David Is Selling His Apartment In Bitcoins 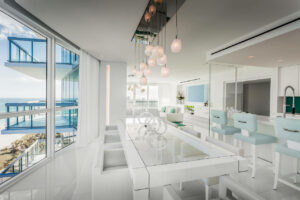 Cryptocurrency is becoming popular all across the world, especially after El Salvador announced to classify bitcoins as legal tender. Among all the attention that crypto is getting, Miami is emerging as a hotspot for cryptocurrency.

The Real Estate industry of Miami is accepting crypto with open arms. After the trending deal of the luxury penthouse in Miami, which was sold for $22.5 million and paid in crypto, Now the popular French DJ announced his luxury apartment for sale on Miami Beach and he is open to accept the payment in Bitcoins.

DJ David Guetta is a popular record producer from Paris and owns a Three-bedroom luxury apartment on Miami Beach which is on the 37th floor and is now available for sale for $14 million. The property has a beautiful beachfront and also includes 3 swimming pools facing the ocean. Guetta announced that he will accept the payment for the property in Bitcoin or Ethereum. Guetta’s decision to accept crypto shows his enthusiasm towards cryptocurrency as the DJ also signed a partnership with Sensorium Galaxy back in September accepting crypto as payment.

The Bitcoin Conference hosted by the city in 2021 brought a major change in the city towards crypto. Recently, Miami gained the attention of the real estate geeks from all over the world after the largest property deal in the city in cryptocurrency, though the agency didn’t share the information about the buyer and the name of the cryptocurrency.

The popularity of the currency among different industries in Miami is highly influenced by Francis Suarez, Mayor of the city and also a crypto-enthusiast. Suarez is working to transform Miami into the hotspot for crypto as he stated back in January.

Looking at the volatile nature of crypto, and especially bitcoins, this decision of Guetta might be a risk. Guetta is a trending artist on YouTube with over 1 billion views on his songs and records. DJ Guetta will be making approximately $4.5 million with this apartment sale as he bought it back in 2018 at $9.5 million from Richard LeFrak who is a billionaire based in New York.

Cryptocurrency is heading towards a bright future in Miami. Miami seems to have many crypto geeks in the city including the French DJ who are making a choice of accepting the cryptocurrency as payment and boosting the currency in the city.