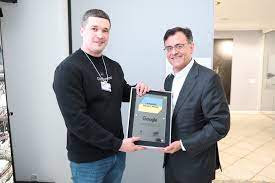 On Monday, July 4, Ukraine Vice Prime Minister Mykhailo Fedorov made a post on Twitter announcing a new development. He tweeted about how Microsoft delegation was awarded ‘Peace Prize’ from Ukrainian president Vlodymyr Zelenskyy.

In the tweet from Monday, Fedorov stated how the country was thankful for having Microsoft Corp. on the ‘light side of digital,’ noting how the company stands for ‘truth and peace.’ Previously, the tech giant had stepped in to aid the country in the time of the crisis caused by the Russian invasion of Ukraine.

Since February, when the Russia-Ukraine war initiated, a range of tech companies have contributed to helping Ukraine to fight its aggressor. Evidently, they have stepped in various ways, such as suspending their businesses and services in Russia. Along with it, gaming companies such as Playstation and Xbox halted their services, and Gaming studios shutting their business in Russia.

Moreover, one of the most prominent companies to extend its help to Ukraine was Elon Musk’s SpaceX. The rocket maker’s Starlink initiated the supply of satellite-based internet access with the use of their user terminals. This was following Fedorov, who is also Ukraine’s Minister of Digital Transformation, requested the help of the billionaire CEO.

Big tech support Ukraine. @Microsoft delegation has been awarded today with "Peace Prize" from the President of Ukraine @ZelenskyyUa. We are grateful to have you on the light side of digital. Microsoft stands for truth and for peace. pic.twitter.com/2usvKERr7m

Reports suggest Russia launched its first attack on Ukraine on February 24 this year, with aircrafts, infantry, tanks and cruise missiles. However, Microsoft suggests that the shots were first fired a day earlier- February 23. Reportedly, this involved a cyber weapon going by the name ‘Foxblade’ which was targeted against Ukrainian computers.

In fact, security specialists at Microsoft found pre-invasion malware attacks in January itself, which attacked about 70 Ukrainian government websites. Additionally, the company came up with protection for destructive and newly discovered malware into the 365 Defender Cloud, along with the On-premises Endpoint Detection (EDR) offerings.

Alongside, Microsoft President Brad Smith stated how the RiskIQ platform from the tech giant was used for the identification of cybersecurity vulnerabilities in the system of the Ukrainian Government. He stated how Microsoft gave a list of systems that were ‘exposed and vulnerable’ to the government. These had ‘unpatched high impact common vulnerabilities and exposures (CVEs) which could generate ‘a foothold for attackers.’

For Microsoft’s contribution to Ukraine during the war, the Ukraine vice prime minister took to Twitter stating how the tech company was awarded the ‘Peace Prize’ by Volodymyr Zelenskyy, the President of Ukraine.