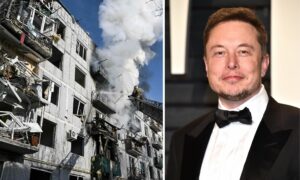 A particular shipment containing SpaceX’s Starlink satellite internet dishes notably arrived in Ukraine on Monday, February 28. The time span between its announcement and arrival  turned out to be less than 48 hours. It was only two days in advance when Elon Musk made the announcement that the company would be sending support. A top official of the Ukrainian government gave the statement.

Mykhailo Fedorov, the digital minister of Ukraine tagged Musk in a request on the social media platform, Twitter on Saturday, February 26. In the following post, he mentioned that Starlink was “here” i.e., in Ukraine. Along with it, was a picture showing more than about two dozen boxes of user kits of SpaceX in the rare of a truck.

Each Starlink kit in known to include a user terminal to connect to the satellites in. Along with that, it includes equipments such a mounting tripod, a Wi-Fi router, etc. It is still not known as to how may kits SpaceX is finally planning to send to Ukraine. These kits come as a huge extension of the help the company has promised to the nation.

Fedorov thanked Musk in his tweet; Musk responded: “you are most welcome.”

Ukraine-based Oleg Kutlov also thanked SpaceX for its support in a tweet. He posted a screenshot of an internet speed test on Monday, saying “Starlink is working in Kyiv.”

The CEO of Starlink company stressed this Sunday that Starlink network was already “active in Ukraine.” Federov’s request for further assistance came up following a suspected cyberattack that affected the satellite-internet service of Viasat. However, it is still unclear as to how many customers were bothered by the company’s outage.

Elon Musk had previously emphasised on Starlink’s flexibility in case of how much internet service it can provide. Last September, he spoke about how the company is planning to use necessary links between the satellites. This would work towards creating a network that could have the ability to provide service in nations that are known to prohibit SpaceX from putting up ground infrastructure for distribution.

Musk had an adequate answer for government regulators who desire to block Starlink network from using this particularly capability. He said, “they can shake their fist at the sky.” As of now, the company has already installed about 2,000 Starlink satellites in support of its upcoming global network. SpaceX already services around 145,000 users in number, as of January 2022. These users pay the standard fee of about $99 a month and $500 for an upgrade to the premium tier.