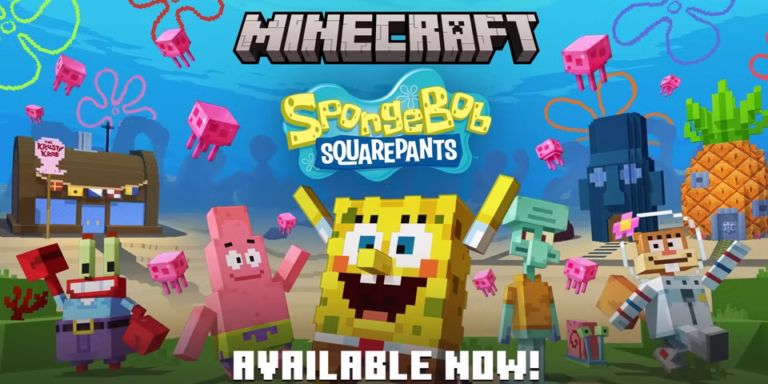 A month after the announcement of the new Spongebob Squarepants DLC in Minecraft, it has finally been released, available to download in Minecraft. Minecraft released a new pack of DLC Tuesday, made possible through a partnership with Nickelodeon and Spark Universe.

Fans of both Minecraft and SpongeBob now have access to a variety of underwater locations to explore, along with skins for over 40 SpongeBob characters created by Spark Universe, in SpongeBob SquarePants DLC. The new DLC for Minecraft not only gives players access to the 40 new skins, it allows players to visit the Block-y version of Bikini Bottom, filled with tons of activities. You will also get to dress up as some SpongeBob characters thanks to 40 new Minecraft skins the DLC is adding to Minecraft.

Swim on down to Bikini Bottom with the new @SpongeBob DLC from @SparkUniverse! Explore Bikini Bottom’s iconic locations with Mr. Krabs, Patrick, Squidward, and more. Don’t forget to pick up your free Character Creator item in the dressing room!

When Minecraft releases additional updates and Minecraft DLC, we will make sure to keep you all updated. If you missed Minecraft Now in June, the series of videos giving players an inside look at different aspects of how the game works, as well as a peek into the upcoming content, including the new Spongebob DLC, we have got you covered. From protecting Krusty Krab from the Anchovies, using construction skills and Redstone to aid Patrick and Sandy, to fighting off Plankton, there is plenty to uncover in Minecraft’s new Spongebob Squarepants DLC.

After the Lightyear add-on was released last month, Minecraft continues its fun journey with its latest DLC, SpongeBob SquarePants — and it is available from Minecraft Marketplace right now. Much like Lightyear DLC, Spongebobs new DLC is a formal adventure, taking us deep into the bowels of Bikini Bottom with a spectacular recreation of Spongebob home town.

In a unique move, Mojang released the trailer for the new Minecraft DLC, Spongebob, the very same day that it was released. It appears that players were not given any sort of pre-order period, as a result of the title’s immediate release. The release also came shortly after that of a brand-new DLC, Lightyear Minecraft, that featured several missions as well as new builds.

According to a blog post, the aim for the new Minecraft DLC is to bring Bikini Bottom citizens their best day yet, apparently recreating some of the more iconic moments of SpongeBob. With a new DLC crossover with SpongeBob, announced today for the Bedrock Edition, players will get to merge two nostalgia-filled parts of their childhoods into one entertaining, and apparently fully realized, experience.