MoneyGram and Stellar’s Partnership is the news crypto investors would want to hear!

MoneyGram and Stellar’s partnership started in October 2021, when both the companies went on to collaborate the connection of digital wallets to the Stellar network, thereby granting users access to MoneyGram’s global retail platform. MoneyGram certainly feels that cryptocurrency is the new age revolution and is here to stay. It also feels that, collaborating with Stellar will help MoneyGram to grow its network in the crypto sphere. Previously, MoneyGram had announced a series of partnerships with Stellar which were more or less successful. The utilization of blockchain technology was one of the prominent collaborations between the two. MoneyGram also went on to invest in crypto firms such as investing in Coinme (The largest Licensed Cryptocurrency Cash Exchange in the U.S)

MoneyGram’s new partnership with Stellar to bridge the gap between crypto and fiat currencies!

MoneyGram recently announced its intentions to launch a service in partnership with Stellar blockchain, allowing the users to sell stablecoins and covert them into fiat currencies without any complexities or hinderances.

The CEO of MoneyGram, Alex Homes feels that both cryptocurrency and fiat currency are not compatible to one another as of today. But he envisions to bridge the gap between the both to revolutionize the financial sector.

MoneyGram will use Stellar’s blockchain, to build a platform for stablecoins which will be used in remittance payments. The platform is tipped to use Circle’s USD coin when the service comes into existence. 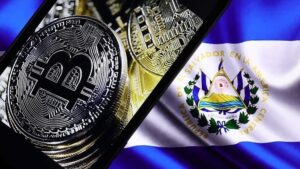 Since, EL Salvador was the first country to announce bitcoins as its official legal tender, it provides investors, companies with a great opportunity to tap the market. Alex Homes, the company is also in talks with third party companies prevalent in EL Salvador which provide digital wallets to its customers. MoneyGram wants to explore and tap the opportunities present in EL Salvador which will directly boost the new service which is soon going to be launched in partnership with Stellar.

Crypto Market Crash and its impact.

The Crypto market crash was a catastrophic one which wiped out billions of dollars from the market. The Terra’s inability to save both of its stablecoins made the crash look more fatal than it was. But, Homes has been optimistic about cryptocurrency from the start. He feels cryptocurrency is here to stay and its volatile nature cannot influence the investors to stop trading in it.

The news of partnership between MoneyGram and Stellar will surely help the market to grow and revive back from the crash. Though the extent of revival will only depend on the type of measures these companies take and the behavior of the investors will directly influence the market after such a debacle.