Mukunda Foods and Mechanizing Food Production An in depth look into the founding of Mukunda Foods. 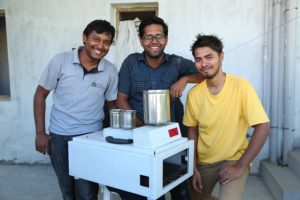 We have previously spoken about how robotics is going to change the future and signs of it are currently already being seen. Through machine learning and artificial intelligence, robotics is being propelled into industries like never before and are showing their true potential.

Sectors like aviation, defence, space and rockets, and automation robots are coming to life in humanoid form, as voice assistants, like droids, or even just as software with wheels.

But sometimes the robotics industry can seem a little distant or be seen as a thing “used only in factories”. Yes, we may have the automatic vacuum cleaner called the Roomba or AI-powered speakers like Alexa, but there are multitudes of uses of robots in homes that are now being explored. Today we are going to speak of the use of robotics in the kitchen by a company known as Mukunda Foods.

Before we get into what products Mukunda Foods make let us take a look at how the journey of this company began.

It all started with two students at SRM University in Chennai who had an equal and unparalleled love for food- Eshwar K. Vikas and Sudeep Sabat. Along with being foodies, the two also had a shared passion for entrepreneurship and business right from the start.  In college, they got together and were pondering on the idea of automation of food and how that could increase productivity around kitchens for an engineering course project.

Pushing that same idea forward, Vikas and Sabat formed the company Mukunda food with a vision to automate labour-intensive Indian food after graduation. As the company began, they started working on a few prototypes when the pitched their idea to the Indian Angel Network. This network took the company up into an incubator which helped the two college students work on and refine their product.

As the product kept getting better, Mukunda Foods’ relationship with the Indian Angel Network also stepped up. From just incubating the automated food company, the IAN invested in Mukunda Food to catalyze growth. We shall discuss more about the funding of Mukunda food in another following section, but before that let us talk about the revolutionary product.

The Dosamtic is the flagship product made by Mukunda foods. It is now a much more elevated and refined product that what the two founders had thought of during their college days.

It is the world’s first, tabletop, dosa making machine. IThe machine about the size of a standard box and it  operates in a very simple manner:

The cooking of the dosa can be customized to the preference. One can load different types of dosa batters on it, they can change the thickness of the dosa, and also the size of it. Apart from the dimensions the crispiness and the roast on the dosa can also be set to preference.

The amount of oil that goes into the dosa can also be controlled just loading the machine with oil one wants in order to get low fat or fat-free dosas.

The machine operates on a touch-based interface making it easy, user-friendly, and accessible.

“We realised that in order to make the perfect dosa, we needed a dough dispenser that should rotate at one rotation per minute (RPM). The slowest motor we could find was one that had a 1,400 RPM speed. We went to many professors and experts in the industry but no one could help us reduce the speed. Finally, we met a mechanic in Chennai who never even went to college but could give us all the techniques and formulae to achieve our task,” said Vikas to Economic Times.

But Why Switch To Robots From Humans?

One can easily ask the question of why would anyone switch from a human making a dosa to a specialized machine just for one food. There are many possible answers to this.

Of course, this sort of product is hard to diffuse in a market and the industry that trusts the concept of “human touch”but the quick adoption of the Dosamatic tells us the consumers in India are willing to take the jump and make the shift.

According to Mukunda Foods, the Dosamatic now sells in 20 countries and has had over 600 customers using their niche product.

Funding and The Board:

Mukunda Foods first began with an investment from the Indian Angel Network of around Rs. 1 Crore INR, and their website says that in so far they have been the only investor in the company.

The company is for profit which leads us to believe that Dosamatic is the Mukunda Foods’primary money maker.

The board of Mukunda Foods includes the two founders, Hari Balasubramanium, Rakesh Malhotra, and Saurabh.

In terms of the future, “Mukunda Foods addresses a relevant problem faced in the food retail industry. The food industry is an ever-growing and dynamic industry that is open to innovation to help reduce production costs. Innovations and evolutionary equipment like that by Mukunda Foods would surely make an entry into the marketing budgets of food retailers”, says Eshwar.