Firefighting is a dangerous job. The firefighters often risk their lives in order to save others. During such rescue operations their surrounding are highly fragile too. Their vision is often blocked with smoke and flames making it impossible for them to navigate their way. If such a scenario occurs the firefighter’s life is in danger too.

Often it becomes difficult to navigate the person who is asking for help due to the situation occurred into the place. This might be the case of locating a firefighter too. Too much smoke and debris make it nearly impossible to approach the firefighter asking for help or assistance in the rescue operation.

In order to tackle this problem, NASA’s Jet Propulsion Laboratory and the Department of Homeland Security Science and Technology Directorate (S&T) have come up with a product called the ‘POINTER’. The POINTER stands for Precision Outdoor and Indoor Navigation and Tracking for Emergency Responders. 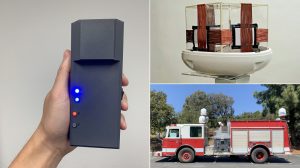 This system enables the team to locate and track firefighters during a rescue operation. The POINTER functions by using the magnetoquasistatic (MQS) fields. The reason this field is it being used because the material which is present in most of the buildings and construction allow this quasistatic magnetic fields to easily permeate. This removes all sorts of unpredictability from the path and pinpoints the highly accurate location.

There were other alternatives such as the radio frequency identification or GPS, which uses radio waves. The reason being such systems are ideal to be used in an open space, once a person is indoors or surrounded by high rise building they are not so reliable. On a general basis this might seem like a minor inconvenience however during a rescue mission it is a matter of life and death.

Greg Prince, leading S&T’s first responder research and development programs says, “Even with all of the advances made in firefighting technology, we still lose far too many firefighters each year. We want them to know that we have their backs, that we are working to give them the tools they need to ensure their own safety. POINTER is one of those life-saving solutions.”

The POINTER consists of three parts which are a receiver, a transmitter and a base station. The receiver part is worn by the firefighter which is currently the size of a cell phone. It is expected to get much smaller upon further developments. The transmitter is fitted in the vehicle outside which generates the MQS fields. These fields travel through the building and are capable of locating the receiver in and around of 230 feet or 70 meters.

The POINTER can prove to be very important tool for the firefighters because not only does it provide the location but can also alert about the position of the user. Such as whether the user is standing up or lying down, whether they are moving or are lying motion less and also the direction in which they are facing.

Ed Chow, JPL’s program manager for the POINTER said, “This is a very exciting technology that adds another dimension to firefighters’ situational awareness. Firefighters can be tracked in real time and, if they become unresponsive, their team members can see if they are trapped under debris or if they are injured so a rescue can be mounted.”