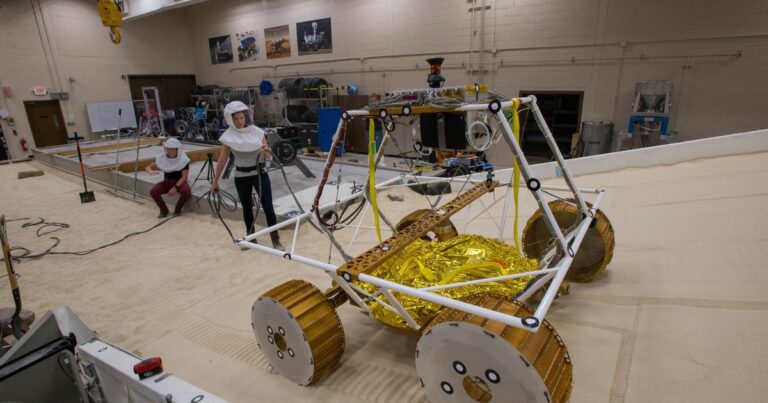 NASA’s scientists and researchers are planning to send the first lunar rover on Moon’s South Pole in search of water i.e., dihydrogen-monoxide deposits. Humans already know that there is a lot of water on the moon, especially in its north and south poles but it isn’t in liquid form, as we already expect. Thus, this mission is set out to find water in different states of matter with hydrogen molecules as the most crucial element.

NASA has previously conducted multiple missions on the Moon including SOFIA, Prospector, LCROSS, and articulating the combined knowledge from these missions, scientists know that there are millions of gallons of water on the Moon’s surface combined with regolith which is the Moon’s soil or Moondust.

Now, scientists know that there is water on the Moon but are not sure about the distribution of water on the Moon’s surface, the form in which water will be available, and where exactly to look for water and this is why NASA is conducting its VIPER Mission (Volatiles Investigating Polar Exploration Rover) which is set course for 2023.

The VIPER, as it scouts over the Moon’s South Pole will use its NSS technology which is the Neutron Spectrometer System that will survey the regolith on the Moon in search for water molecules at depths up to 0.9 meters by considering and analyzing the energy losses at the molecular level, in cosmic rays that occur when hydrogen molecules strike, as mentioned in a report by Engadget. We already know one thing for sure, where there is hydrogen, there is water.

Anyhow, the VIPER Mission will not be NASA’s first mission on the Moon, but it will be the organization’s first autonomous mission on the Moon. As Engadget notes, the Moon has no atmosphere which makes the weather conditions extreme on the surface. If it is hot, it is too hot, and of if it is cold, it is too cold, and preparing the Lunar Rovers for such extreme conditions is a task for NASA.

Another challenge is regolith, the Moon’s electrostatically charged soil that can either pile up to be a mountain for NASA’s VIPER or bury the rover deep into the surface. NASA notes that in order to prepare its lunar rover for the same, the team has programmed it to swim.

VIPER is being prepared for any extreme conditions that the rover might face on the Moon. NASA has confirmed that VIPER will not be running blind on the Moon’s surface and the space research organization is working on the production of a lunar road map that will ensure to guide the rover all the way up to the South pole. As mentioned in a report by Engadget, NASA is said to use its open-source Stereo Pipeline software tool along with its Pleiades supercomputer to assemble all the images taken by the Lunar Reconnaissance Orbiter using photoclinometry. The use of these technologies combined will help the VIPER to avoid pitfalls and other challenges such as craters on the lunar surface.

Furthermore, the VIPER is said to be installed with NASA’s rocker-bogie suspension system. It will be powered with solar energy and will be able to move in any direction at any point in time, independent of where the rover is pointed at. Each of the four wheels of the VIPER lunar rover will have the capability to be steered independently.

This mission is fairly crucial for NASA as it will allow the scientists to study the Moon’s surface primarily to find water but much more. The study of Moondust a.k.a. regolith will be very significant in this mission. The VIPER Mission could be man’s first step towards finding exoplanetary colonization and could be a major contributor to NASA’s Artemis Mission.

What do you think, can humans imagine a life on the Moon? I think it can be a possibility in the future but not anytime soon, there is a lot more to know about our natural satellite before we can go live on it.

In another mission, NASA is also planning to launch a rocket on the Moon to bring back Moondust to Earth in order to test the soil’s endurance and capabilities, if it can be used for construction purposes. NASA is working tirelessly to bring the future to us and very soon, we could be living and colonizing Mars, the Moon, and maybe some other exoplanet.