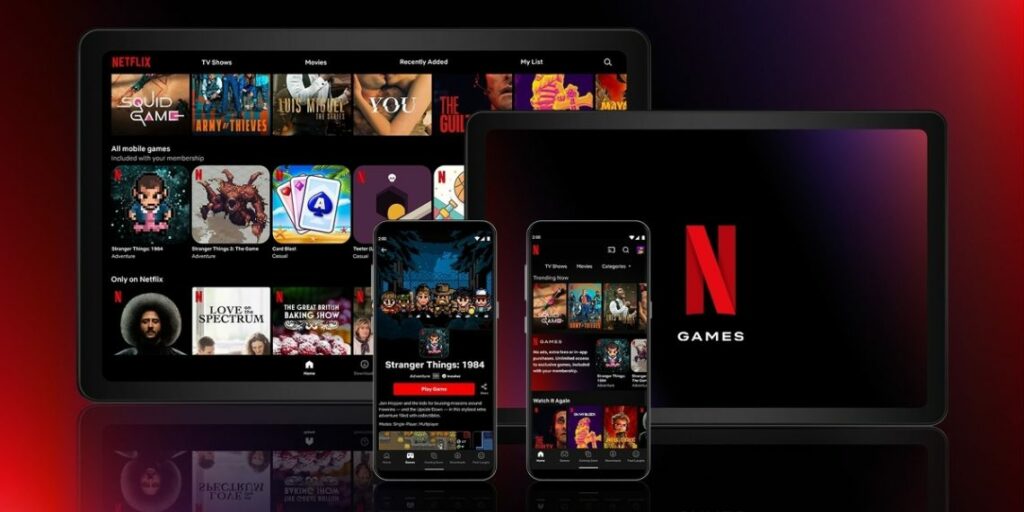 Netflix has announced the release of its first five mobile games, which will be accessible initially on Android smartphones and then on Apple iOS devices in the coming months, according to a blog post and a tweet from the business. For those having an Android phone or tablet, the games are immediately available.

Starting Tuesday, they’ll be available as individual downloads in the Google Play store, organised by title (see below). Netflix will begin rolling out games within its Android app on Wednesday at 10 a.m. PT, so you won’t have to leave the app and can play them all in one spot.

Games will be accessible in a row on the homepage, in a new games tab, or through a drop-down menu for categories as they are added to Netflix’s main interface.

While the first games are only available as downloads, further games will be available in a variety of formats: some will be downloads, while others will require an online connection. Ads, in-app purchases, and additional costs are not available in any of Netflix’s games.

Stranger Things: 1984 and Stranger Things 3: The Game, both previously released games made by BonusXP; Shooting Hoops and Teeter Up, both developed by Frosty Pop; and Card Blast, developed by Amuzo and Rogue Games, are the first five games, all casual play fare designed for mobile-only play. The latter three games were part of Netflix’s mobile gaming test earlier this year in Poland, Spain, and Italy.

The move is the latest and most significant step in Netflix’s effort to make video games a common element of its subscription packages. Netflix said in July that it would enter the gaming market, beginning with ad-free games for mobile devices such as phones and tablets, which would be available on the company’s existing service at no additional cost to customers.

Since it began streaming in 2007, and launched its first original show in 2012, the expansion signals its most significant foray into a new genre of entertainment.

The addition of gaming to Netflix’s core business of TV episodes and movies expands the company’s reach as the world’s largest subscription video service. Netflix has always stated that its competition stretches beyond the traditional television and film industries that compete with it presently.

Because of the vast amount of entertainment hours they command worldwide, the firm has regularly called out gaming phenoms like Fortnite, as well as user-generated-video juggernaut YouTube, as some of its biggest competitors.

And the gaming business is a major source of revenue. Last year’s pandemic sparked a spike in interest, propelling it to a market larger than movies and North American sports combined. Last year, the worldwide video game market was predicted to be worth approximately $178 billion, and by 2023, it is expected to surpass $200 billion.

Netflix isn’t the only company expanding its gaming offerings. Amazon, which owns Prime Video and has its own gaming studio, has invested in Luna, a cloud gaming service. Google, the parent company of YouTube, has invested in its own game-streaming service, Stadia. Apple Arcade, which produces its own films and TV series for Apple TV Plus, has also expanded.

Netflix, on the other hand, would be unique in include games in an one subscription. Others sell their gaming services alone or as part of a package that includes a number of other memberships.

Netflix has outlined broad gaming aims, implying that it plans to pursue console games for Xbox and PlayStation in the future.