New Development in VR Field TapID for VR at Your Fingertips

Virtual Reality (VR) has been incorporated in many sectors due to the endless possibilities it provides. It provides the user’s an absolute immersive digital experience. This technology has been used for training and development purposes in various fields as it saves resources and money while giving a realistic experience to carry out a task.

Virtual reality is being used for trial and error method and if any mistake is made, one can simply start over without any resources being discarded. With all such possibilities, we rarely get to see VR being used for daily applications. To address this issue, researchers at ETH Zurich have now developed a dual sensor wristband which will allow free hand interaction with virtual reality. The team consists of Christian Holz, Manuel Meier, Paul Streli and Andreas Fender.

Christian Holz who is currently serving as a professor at ETH Zurich’s Institute for Intelligent Interactive Systems said, “Today, VR is used mainly to consume content. In the case of productivity applications such as in office scenarios, VR still has much potential for development to replace current desktop computers.” 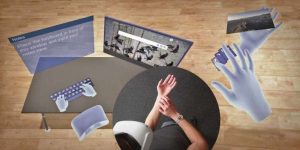 The name of this sensory technology developed is TapID. It is a rubber band embedded with several acceleration sensors. The sensors are capable of detecting when the hand touches a surface and which finger has been used by that person. Whenever a person taps with their fingers, each finger produces a vibration profile which is unique.

The sensor design developed by the researchers is capable of detecting smallest differences in the vibrations made by the fingers in order to differentiate between each finger movement. The researchers have also incorporated machine learning which collects data in real time.

According to Christian Holz the reason why we don’t see much of virtual reality in our day to day life is because of the kind of interaction that is going on between humans and technology. Most of the VR applications which are available are operated with controlled which are held by the user or the user’s hands need to be in the air.

Christian Holz says, “If you have to hold your arms up all the time, it quickly becomes tiring.”

He continues by saying, “This currently prevents normal work processes from becoming possible, as they require interaction with applications for multiple hours.”

TapID poses a solution for most of such problems. The researchers have demonstrated its precise input generation with the help of several applications which they had programmed for their development. This also includes a virtual keyboard and a piano.

While explaining the advantages of TapID Christian Holz says, “Here, both spatial accuracy and timing are essential. The moment at which the keys are touched must be captured with maximum precision. The wrist sensors can do this more reliably than a camera.”

Christian Holz also said that, “Our sensor solution is portable and it has the potential to make VR systems suitable for productivity work on the go. TapID allows users to operate applications with their hand or thighs—anywhere and any time.”

Adding further he said, “TapID could be a big enabler in moving into that direction.”

For further developments, the team has decided to continue with their research in this field and to continue improving this technology with more test subjects. They are also planning to develop more applications to integrate TapID into office space and other productivity scenarios.