Artificial Intelligence (AI) is hailed as one of the most advanced forms of technology. It has proved to be effective in carrying out many functions. AI has been useful in carrying out many functions such as assisting in curing a disease or helping to grow crops and keep an eye on the climate. It has also proved to be quite efficient in combating global warming. AI technology has quite a number of uses and due to its accessibility, more and more sectors are now incorporating it to optimise their processes.

Now, the tech giant company Samsung is combining AI with robotics to develop a personal assistant which is capable of carrying out a number of domestic tasks. The company is working on developing three robots, one of which is Bot Handy which is capable of helping its user to sort out the laundry.

The president and head of Samsung Research, Sebastian Seung said, “Bot Handy uses AI to understand objects, like a glass cup or ceramic plate, taking note of their shape and materials to work as your trusted partner.”

He further added that, “Bot Handy can move around and do things like set the table or put away groceries. It flips the script on what a robot in your home could look like.”

This robot, Bot Handy, consists of a single arm. It is also equipped with a camera incorporated with artificial intelligence which helps it to recognise objects and how to handle it accordingly. This robot has three pivot points which grants this robot with flexibility to carry out functions such as grasping and carrying delicate items such as dishes.

Artificial Intelligence which has been included in this robot helps it to detect the amount of pressure which needs to be applied while handling a particular item. It also allows the robot to detect, list and help with sorting of the laundry. Not only that, this robot can also pour a glass of wine with no mistakes made. 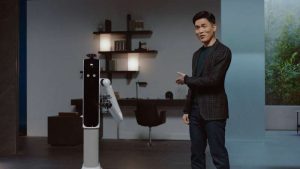 Sebastian Seung said, “”Among many things, your home has taken on a greater significance. But what if that home, and those technologies in it, were actually built around you? At Samsung, we’re finding ways to do just that.”

Bot Handy has a face which displays two eyes to convey emotions by closing and expanding. It is capable of moving around the room without any inconvenience with the help of a rolling base.

The second robot unveiled by Samsung is named Bot Care. According to Sebastian Seung this robot is designed “to take care of the little details of your life.” This robot was launched virtually due to the Corona pandemic.

The third robot is yet to be launched and is named JetBot 90 AI+. This is a smart vacuum cleaner. So far, the company has not released any details about when these robots will be available for the public. Also, no information about price is disclosed.