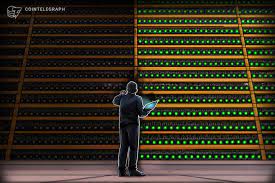 New Jersey’s pension fund chased bitcoin mining stocks with multimillion-dollar bets on two of the industry’s most recognisable names, according to the disclosure documents.
The state-managed pension owned $3.66 million in Riot Blockchain and $3.39 million in Marathon Digital Holdings as of June 30.

According to disclosure records, the state-managed pension had $3.66 million in Riot Blockchain (NASDAQ: RIOT) and $3.39 million in Marathon Digital Holdings (NASDAQ: MARA) at the end of June.

Here are top 5 states where cryptocurrencies are catching on

California, home to Silicon Valley and one of the key hubs for the US technology industry, is unsurprisingly the state with the most interest in cryptocurrencies. California ranks first in Google Trends’ keyword search statistics for specific currencies like Bitcoin, Litecoin, Ethereum, and Ripple, with scores of 98, 92, 97, and 85 out of a possible 100. It also has a high ranking for searches for the term “cryptocurrency,” with a score of 93. In addition, there are over 500 businesses in the state that accept Bitcoin as a form of payment.

New York, in the second position, is obviously one of the typical suspects. New York City, a major US tech hub and the financial capital not only of the United States but possibly of the entire globe, propels the statewide average level of interest to astronomical heights. New Yorkers’ enthusiasm for Litecoin and Ethereum contributes to the city’s overall trend score of 96.25 out of 100 for interest in individual currencies.

New Jersey, which has the most educated population in the country, the most scientists per capita, and many New York City commuters, trails New York by a fraction of a percentage point in indicators of cryptocurrency interest. Ripple has more interest in New Jersey than anyplace else in the US, while Litecoin is second, with more interest in New Jersey than anywhere else outside of New York.

Do comment and let us know your views on this.