Engineers from Vanderbilt University have designed a new continuum robot. This robot is capable of achieving multi scale motion. With the help of this robot, a huge sector of complex microsurgeries can be accessed, which was previously impossible to do.

Nabil Simaan who is the Professor of Mechanical Engineering and also the Director of the Advanced Robotics and Mechanism Applications Laboratory said, “Our design achieves motion resolutions of 1 micron or less by using inexpensive actuators. This reconfiguration—with minimal added cost—could accelerate the development of a new class of surgical robots capable of both macro-motion for surgical intervention and micro-scale motion for cellular-level imaging or intervention.”

He also added that, “This greatly expands the capabilities of robotics in minimally invasive surgery.”

This robot can be utilized for both, a large macro motion workspace as required for surgical intervention and also a small micro motions workspace having motion resolutions of 1 micron or less.

The robot will be able to provide precise control during procedures on complex aneurysms, arteries and tiny veins, nerves and the other delicate parts of the eye, the vocal cords and the inner parts of the ear with the help of miniaturization and range of motion available.

It can also be used for tumour eradication, biopsies and to deliver drugs at targeted cells in the future.

Nabil Simaan and his team made use of the flexible architecture of their previous continuum robot by altering its equilibrium pose in order to carry out operations at the macro and micro scale.

Nabil Simaan and his team of colleagues consist of Giuseppe Del Giudice who is a mechanical engineering graduate student, Jin Hui Shen working as the Research Assistant Professor of Ophthalmology and Visual Science, Karen M. Joos who is a Physician, Joseph N. And Barbara H. Ellis Family Professor of Ophthalmology. They have accomplished a preliminary integration of a custom made OCT probe. 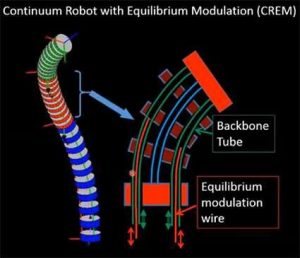 Simaan calls these as the ‘Continuum Robots with Equilibrium Modulation’ or CREM. Simaan said that, “This new class of robots will provide micro-precision while traversing macroscale sinuous pathways to the operation site. Potential benefits include exact tissue reconstruction and complete surgical eradication of tumors.”

The previous continuum robots were able to achieve a worm like motion in order to carry out macro manipulation due to its flexible architecture. The robot seems to have derived its inspiration from an earthworm and its body is made of segments of discs or rings.

The engineers made use of tubular secondary backbones in order to make this robot capable of carrying out large scale of motion. When the push and pull force is applied the configuration of this robot changes. In order to modulate the equilibrium shape, the researchers added wires that were able to slide in and out of the tubular backbones.

It is always a wonderful sight to see when robotics is used for the betterment of humanity. The field has a massive amount of scope and potential to uncover and achieve so many things. We can always look forward to what the future holds for this sector.