One simply cannot deny the high level of contributions robotics bring to this world. Robots are now seen as an answer to almost all of the difficulties. Due to over the years of error less service given, robots are now trusted by the general public when it comes to safely carrying out certain tasks.

With that being said, even though robots are man made, the field of robotics largely derives its inspiration from nature. One can see that certain robots which are functional in extreme environmental conditions will have features similar to fauna found in that region. Countless studies and research has been carried out in order to make the robots carry out behaviour similar to that of animals.

Two researchers from the University of Zaragoza have now developed a quadruped robot inspired by arachnoids. The name of this robot is LoCoQuad. The researchers Manuel Bernal Lecina and Javier Civera are the brains behind this development.

Speaking about the research process Manuel Bernal Lecina said, “This research journey began with a summer project that became my bachelor’s degree thesis.”

He added that, “The initial idea was to build a super low-cost robotics platform capable of basic ad-hoc movements, such as rotation, walking, and taking on specific poses. I started building basic prototypes and testing the advantages of each iteration, searching for the right typology and the best price-quality compromise for actuators, control units, and batteries.”

The main goal behind developing LoCoQuad was to make such a robot that is low in cost and can be used for training and evaluating reinforcement learning (RL) algorithms.

This robot is very affordable when it comes to its hardware costs. The range for its hardware lies in between $150 to $165. This makes it quite easy for this robot to be manufactured on a large scale. This robot is quite user friendly and can be acquired easily.

Giving out more details about this robot LoCoQuad, Manuel Bernal Lecina said, “I always like to talk about LoCoQuad as a robotic platform capable of almost everything.”

He also added that, “But being realistic and a little bit more rational, LoCoQuad is a box with four legs, completely open-source and general-purpose, with the flexibility to implement a wide array of algorithms, ranging from behaviors relevant to basic education purposes to the advancement of state-of-the-art at the highest educational levels.” 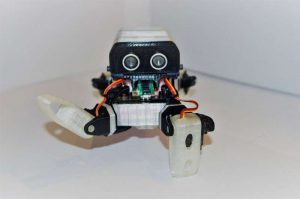 The robot was made to undergo a number of experiments and carry out a variety of tasks by Manuel Bernal Lecina and Civera in order to test its effectiveness. With this, the team concluded that the robot is capable of carrying out a variety of basic tasks. This makes it an ideal candidate to test reinforcement learning (RL) algorithms and machine learning algorithms.

Manuel Bernal Lecina said that, “”LoCoQuad is just one more piece of the puzzle. It allows us to demonstrate that even clumsy, cheap and simple robots can be taught (or learn by themselves) to fulfill basic and complex tasks. LoCoQuad brings a new alternative to verify that the next big milestone in the robotics field is possible.”

The team has already put the robot into action in order to compare algorithms and conclude which are the most effective ones. It can also be used to test various machine learning techniques and learn about the ways it can be improved.