Robots have a lot of capabilities that are developed and utilized by humans. They are deployed for various purposes and are used to carry out operations which humans would not be able to perform. They are equipped with machine like precision and can carry out tasks even in extreme weather conditions.

Recently, a team of researchers at the University of Texas has now developed a robotic team of devices that is capable of moving autonomously and can be deployed at difficult to reach sites and hazardous locations in order to collect data and carry out surveys. This team of robots is capable of providing information much faster than humans.

Dr David Larry who is currently serving as the professor of Physics at the School of Natural Sciences and Mathematics said that, “An autonomous team like this could do a survey and rapidly sample what’s in the air and the water so that people could be kept out of harm’s way.”

They also added that, “In another context, the robots could provide a general survey of ecosystems, or they could look at situations such as harmful algal blooms in lakes.”

The robot team comprises of autonomous devices that are capable of gathering information on the ground, in the air and water. This ability makes them ideal to be deployed in hazardous environmental situations or to carry out surveys regarding environmental purposes. This team can also be used to provide real life decision support pertaining to areas such as agriculture and inspection of infrastructure.

This team of robots enables decisions that are data driven and are transparent due to their ability to rapidly collect data. This also allows more real time data to be gathered rapidly. 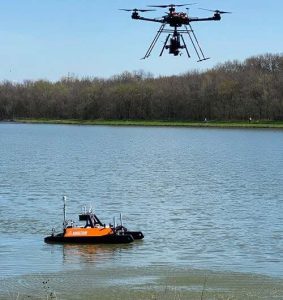 Dr David Larry said that, “”Not only do we get depth information, we also can measure the height of any vegetation that’s in the water. We can determine what is at the base of a pool, pond or estuary and the kinds of fish in the vicinity. With the sonar we can count and size the individual fish and get the total biomass in a vertical profile.”

This multirobot, multisensor team can incorporate a number of combinations of devices, for example, a robot boat equipped with sensors to measure water composition along with sonar to track objects located below the surface and also to provide aquatic remote sensing.

Simultaneously an aerial robot can be used to collect hyperspectral images. With the help of machine learning, the devices can use this remotely sensed information and construct wide area maps of the environmental state.

Along with providing access to the hard to reach areas that are typically dangerous for humans the robot team can also significantly increase the amount of data that is collected. The team also consists of a ground vehicle that collects soil samples and makes use of the ground penetrating radar. The unmanned aerial drone is equipped with several cameras, onboard sensors and a downwelling irradiance spectrometer.

Dr David Larry said, “In just a few minutes we can collect many thousands of data records,” Lary said. “So, if you were to deploy a robot team multiple times over several locations in a period of about a month, you could get hundreds of thousands—even millions—of records. It’s the rapid acquisition of relevant data that can help keep people out of harm’s way, which is the point.”