Virtual Reality (VR) has been used by many sectors mainly for the training and entertainment purposes. This in turn saves a lot of time and resources for the company which uses them. The VR technology now a days is also easily accessible and can be considered to be fairly affordable. Despite all this the researchers so far were not able to develop a VR experience that will provide its users with a full sense of immersion in the digital world.

One of the greatest challenges faced by the developers was to give the users a sensation of walking while they are using the VR set. But now according to a paper published in a journal ‘Frontiers in Virtual Reality’ by the researchers from the Toyohashi University of Technology and the University of Tokyo in Japan, have descried custom built platform which is capable to replicate the sensation of walking while using the VR headsets. All this can be achieved while the user is sitting on a chair, motionless.

The aim of the study published was to investigate whether the virtual persona which the user sees in the VR experience, from a first person point of view or a third person point of view, is able to convey the sensation of walking in the virtual environment via optic flows and rhythmic foot vibrations. So when the users move their avatar on the screen, the platform syncs these movements with the body of the user. This provides a more realistic experience and makes the user feel as if their own body is conducting all the movements, according to the researchers.

According to Yusuke Matsuda, who is currently serving as a project assistant professor at the Department of Computer Science and Engineering at the Toyohashi University of Technology and is also the corresponding author of the paper, “Walking is a fundamental and fun activity for human in everyday life. Therefore, it is very worthwhile to provide a high-quality walking experience in a VR space.”

He further adds, “We believe that the general public is also very likely to be interested in this study that combines walking and VR experiences which has seen rapid growth in demand as a result of COVID-19.” 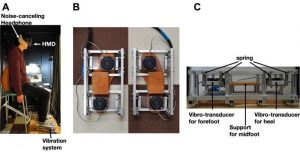 For this research a team of 40 participants were split in between two experiments. These experiments were conducted on the basis of first person and third person perspective. The users actual head movements were linked to the body of their virtual avatar. Sitting down on a stool, 4 vibro transducers made out of aluminium springs were connected to the participant along with wood plates that were placed on the user’s foot. So when the digital persona in the VR would move the pads would vibrate and replicate the movements for its users.

According to Yusuke Matsuda “Our study showed that a walking avatar in a first-person perspective enhanced the sensation of walking. The effects were observed not only when the full-body avatar was used, but also when only the hands and feet were presented without the hands-and-feet-only avatar.”

He adds further, “One of the most important features of the walking device we proposed is that it gives tactile and visual stimuli to seated users. Besides, for those without mobility issues, the proposed method is simply less fatiguing than moving the legs by oneself. Therefore, we will be able to easily experience virtual walking for a relatively long time.”