A newer and soft tactile sensor has been developed by a team of researchers at the City University of Hong Kong (CityU). This tactile sensor has skin comparable characteristics. This research has been able to provide new insights into tactile sensor design. These findings will be able to contribute for the better functioning of various applications in the field of robotics. It is considered to be beneficial for smart prosthetics and human robot interaction.

Once these sensors are mounted at the fingertips of a robotic gripper, it was found out that this robot was able to carry out functions such as stably grasping fragile objects and also threading a needle. Such tasks were deemed to be quite challenging in the past for robots. 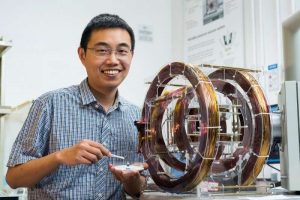 Dr. Shen Yajing who is currently serving as an associate professor at the City University of Hong Kong (CityU) Department of Biomedical Engineering (BME) said that, “We have developed an efficient tactile super-resolution algorithm using deep learning and achieved a 60-fold improvement of the localisation accuracy for contact position, which is the best among super-resolution methods reported so far.”

Dr. Shen Yajing is one of the co authors of this study. This study and the conclusions were published in Science Robotics, which is a scientific journal. The name of the study is ‘Soft magnetic skin for super-resolution tactile sensing with force self-decoupling.’

Dr. Shen along with Dr. Pan Jia who is a collaborator from the University of Hong Kong (HKU), has developed this soft tactile sensor. The main aim was to replicate the ability of human skin to sense the shear force. Shear force is the one that makes two objects slip or slide over each other once they come into contact.

According to Yan Youcan who is the first author of the paper and a PhD student at the Department of Biomedical Engineering (BME), “It is important to decouple the external force because each force component has its own influence on the object. And it is necessary to know the accurate value of each force component to analyze or control the stationary or moving state of the object.”

To further explain the process, Dr. Shen said, “We have developed an efficient tactile super-resolution algorithm using deep learning and achieved a 60-fold improvement of the localisation accuracy for contact position, which is the best among super-resolution methods reported so far.”

This sensor is built as a multi layer structure in order to imitate human skin. At the top layer, the researchers have inserted a flexible and specially magnetised film which is around 0.5mm in thinness. Whenever an external force is applied on this film which is situated at the top layer, it detects the change of magnetic field due to the film deforming.

It is able to decouple the external force into two components, automatically. The two components are normal force and shear force. Normal force is the force applied to the object perpendicularly and the shear force provides the accurate measurements of these two forces respectively.

In conclusion Dr. Shen said, “This proposed sensor could be beneficial to various applications in the robotics field, such as adaptive grasping, dextrous manipulation, texture recognition, smart prosthetics and human robot interaction. The advancement of soft artificial tactile sensors with skin-comparable characteristics can make domestic robots become part of our daily life.”