Almost all the sectors are now trying to utilise artificial intelligence as much as possible. It has proven to be beneficial in all possible scenarios. A similar approach has been taken by ‘Mayflower 400’, which is the world’s first intelligent ship.

This ship stands at 50 feet and weighs around nine tonnes. Also, it is a completely autonomous ship. This ship is covered in solar panels and throughout its journey will study marine pollution and conduct an analysis of plastic present in water and will track aquatic mammals.

The Mayflower project was the brainchild of Brett Phaneuf who is the co-founder of ProMare charity. According to him, the ocean exerts “the most powerful force” on the global climate.

This ship is a result of collective efforts from a number of technology and service providers. Hundreds of individuals were involved in the making of this ship from different countries such as India, United States and Switzerland. 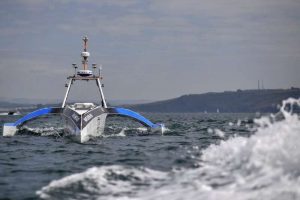 This ship is equipped with a ‘smart captain’ onboard. This smart captain is a result of artificial intelligence technology which took quite some time to develop. The computer first had to learn how to identify maritime obstacles with the help of thousands of photographs.

According to Rosie Lickorish, “It was trained with hundreds of hours of audio data,” she said, “to detect the presence of marine mammals, recognise the marine mammals, and actually tell us something about population distributions out in the open ocean.”

This automated ship is equipped with a high tech system of six cameras and radar which play the role of its eyes and ears. This helps the ship to continue learning on its own. The ship is also taught how to avoid collisions with other objects. It was first taken to the sea for supervised learning.

According to Ollie Thompson who is a robotics and software engineer the ship is capable of distinguishing between what are good actions and bad actions and what is safe and unsafe by running a number of scenarios. In case if this boat makes a mistake it is capable of rectifying the mistake and learn from it by itself.

The data which is gathered by this venture will be provided free of charge by this non profit organisation. This information could prove to be vital for those interested in carrying out commercial shipping in the future.

The ship Mayflower 400 is not yet tested under certain conditions, such as rough seas and storms. This situation is described as the worst case scenario by Jenking Rees. This is due to the lack of regulations around unmanned sailing.

The ship, Mayflower 400 has a number of missions that it needs to carry out. It is required to analyse the chemical composition of the water and measure the sea levels. This ship is also responsible for collection of micro plastics.

Mayflower 400 is a completely autonomous ship. However, the team will be constantly monitoring the ship every day for 24 hours. The team will be able to control the ship remotely in case it is faced with any potential danger.