The craze for digital artwork is breaking new ground as one of the Internet’s best-known memes becomes a near $550 million asset overnight. According to CoinGecko data, the DOG coin — a portion of the non-fungible token displaying the famous Doge meme — has doubled in value in less than 24 hours of trading. As a result, it’s one of the most valuable NFTs to date. 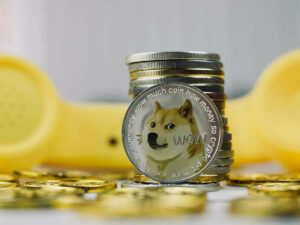 On Wednesday, PleasrDAO, the art group that purchased the NFT for $4 million in June, began providing fractionalized ownership in the form of $DOG. Dogecoin was born from the image of the Japanese Shiba Inu dog breed, which soared to as high as $95 billion earlier this year in a rally that enthralled Wall Street.

PleasrDAO is a group of Defi pioneers, early NFT collectors, and digital artists who have created a strong yet philanthropic reputation for acquiring culturally significant pieces.

NFT is on the rise.

Following a 10-fold increase in total NFT volume to $3 billion on OpenSea last month, these are all symptoms of a market on the verge of exploding. It’s also ammunition for skeptics who see pump-and-dump hazards aplenty in the business, where success is often based on social media buzz and ownership is concentrated in the hands of a few individuals.

Traders can now speculate on fractionalized tokens, or shares of NFTs, that are exchanged on popular decentralized exchanges like Uniswap and Sushiswap, while the assets are by definition unique. To put it another way, holding a $DOG coin is similar to purchasing a piece of art that can be traded on the Nasdaq.

Loot (for Adventurers), a collection of photos of phrases listing a random range of stuff in video games — anything from gloves to a dragon’s crown — is the current Internet favorite in another case of the NFT craze. Dom Hofmann announced the debut of Loot, one of his new initiatives that examine games and game production through the perspective of NFTs, on Friday. “NFTs,” “gas,” and “minting” are terms used in this project to allow you to buy unique items that you will be able to keep in a wallet (such as Rainbow), along with cryptocurrencies (or, as skeptics cheerfully note, photographs).