While the Nothing phone (1) has received both positive and negative reviews from tech enthusiasts and reviewers, rumours are circulating that the United Kingdom based company will soon release a new phone. According to these so called reports, CarlPei and his crew are developing a version of the Nothing phone (1) minus the Glyph lights on the rear. The Nothing phone (1) Lite was the name these reports cited for this upcoming phone.

Carl Pei, the CEO and co-founder of Nothing, has, however, refuted the claims that the business intends to introduce the Nothing Phone (1) lite. Without offering many details regarding the rumors surrounding the lite version of the smartphone, Pei tweeted: “Fake news” after quoting an Android Police tweet. 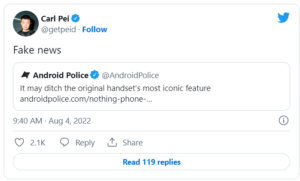 Fans are now limited to the Nothing phone (1) as the brand’s lone phone. Even while a follow-up is inevitable sooner or later, experts predict Nothing’s next smartphone will most probably be a more potent model of the device (1), which would be a reasonable decision to assist the label have a greater effect on the Android smartphone industry than it did this year.

According to the report by Android Police, Nothing was already at work on a second smartphone. An inexpensive substitute for the phone (1) was reportedly under development and would probably be unveiled in India by October. The portal credited The Mobile Indian, another website, for the advancement. According to the source, the phone would be dubbed Nothing Phone (1) and its starting price for the base model with 6GB RAM and 128GB storage could be approximately Rs 25,000. However, Carl’s response to this news implies that the business is committed to adhering to its plan of providing “edgy” products that aren’t monotonous.

From its debut in 2020, Nothing has only released 2 products: Nothing Phone and Nothing ear TWS earphones. The brand hasn’t yet made any information regarding its planned items public. The Snapdragon 778G+-equipped Nothing phone (1) with a 120Hz AMOLED display was introduced on July 12 in a virtual event. Since its release, the smartphone has caused a stir in the Asian and European markets.