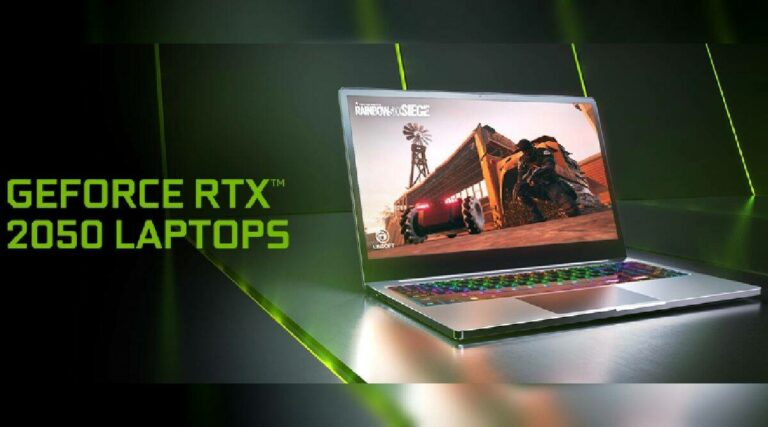 Nvidia has announced Geforce RTX 2050 Laptop GPUs. This GPU is aimed at affordable gaming laptops, and Nvidia said that the first notebooks equipped with this GPU will be available in the spring of 2022. GeForce RTX is likely to be located between the GTX 1660Ti and RTX 2060 GPUs for entry-level games. The upcoming RTX 2050 has 4GB of GDDR6 memory with a main frequency of 14Gbps, but thanks to the 64-bit bus interface, the bandwidth is only 112GB/s, compared to the 336GB/s provided by the notebook version RTX 2060.

According to Nvidia, GeForce RTX 2050 provides 2,048 CUDA cores, slightly higher than laptop GPUs. RTX 2060 discovered 1,920 CUDA cores and more of a tie with the RTX 3050. The RTX 2050 is based on NVIDIA’s old architecture Turing rather than Ampere, which powers the new RTX 30 series on desktop and mobile devices.

RTX 2050 is partially targeted at mid-range laptops which don’t have the capacity required for the RTX 30 series GPUs. The announcement was not just limited to the RTX 2050, Nvidia has also revealed entry-level chips like the MX550 and MX570 mobile GPUs. Nvidia may be gearing up for releasing new GPUs at CES 2022, improved versions of some of which we already know, but as we can see from Nvidia’s press release itself, They plans to unveil several available mobile options, including the MX550, MX570, and the one that got us hooked is RTX 2050.

Nvidia claims the MX570 is the company’s fastest MX GPU to date, which means we can expect improvements in core clock speed, memory bandwidth, and other areas. The MX550 is a performance and efficiency upgrade over the existing MX450 GPU, which is already found in many laptops. Unfortunately, the new additions to Nvidias’ portfolio of laptop GPUs are a bit confusing, as one of them appears to be a holdover from the past, while the two MX series variants are flagships for a range of exclusive MX GPUs for laptops. Companies. Part of the current line of Ampere GPUs, just like some of the best graphics cards on the market today, are siblings to the entry-level RTX 3000 line.

RTX 2050 will be used in entry-level gaming laptops, we could see the MX550 and MX570 in more traditional laptops. In addition to the RTX 2050, Nvidia also announced the new GeForce MX550 and MX570 chips, the latest budget models in the series aimed at people looking for basic GPU capabilities or more flexible display options. According to Nvidia the MX570 and MX550 will be a big jump in efficiency and performance for creative tasks like video and photo editing and will also be a good alternative for gaming over integrated graphics.

These are GeForce RTX 2050, GeForce MX570, and GeForce MX550, and they are expected to hit stores early next year. NVIDIA has officially announced three new laptop GPU options that provide more options for gamers and creators. RTX 2050 GPU-based laptops will also include RT Core, Tensor Core, and NVIDIA Encoder to bring the best RTX GPU features like ray tracing, Nvidia DLSS, and more. Nvidia’s new graphics memory will be available for notebook computers in the spring of 2022. Therefore, we can expect the company to release more detailed information about the new GPU and its availability.

As Nvidia plans to show a series of graphics cards at CES 2022, including GeForce RTX 3090 Ti, it is surprising to announce this news at CES 2022. As Nvidia was forced to revive several old graphics cards in order to reduce the demand for the hot-selling RTX 3080 series, people might think that the release of RTX 2050 notebook GPUs is also a cliché. NVIDIA GeForce RTX 2050 fully supports RTX, to be precise, it is based on the ampere architecture GA107. Interestingly, Nvidia is continuing the ampere lineup, and will soon launch the upcoming RTX 40 series graphics cards.