NYC will be a bitcoin hub within a year, says Adams 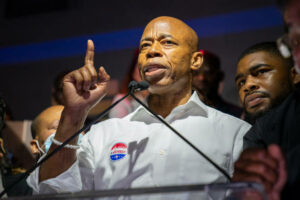 Cryptocurrency has become a worldwide phenomenon in the past few years, especially when influential personalities like Elon Musk, Nayib Bukele, and others advocated the virtual currency this year, the crypto market has skyrocketed. Crypto enthusiasts are extremely excited about the recent developments and following the historical step of El Salvador, many countries across the world are stepping ahead to legalize cryptocurrency.

Amid the continuous shifts in the crypto market, Eric Adams announced his plan to turn New York City into a bitcoin hub. Eric Adams is the leading face of the democracy in New York City. Adams mentioned that his competition is with Miami which is emerging as the crypto hub recently, He said that New York City will soon steal the crown of Miami.

On Tuesday, Adams made this significant announcement after the voting closed.

According to a report by New York Times, Adams is leading with 75,000 votes currently, the election results are yet to be out. Eric Adams is the only mayoral Front Runner in NYC who managed to bring together the Black and Latino voters in the city and hence, Adams has more chances to get elected this time.

Notably, Adams is not the only Democratic Front Runner of NYC who advocated cryptocurrency, there was another crypto geek, Andrew yang who also stated that he will turn the city into the center of bitcoin but he only secured 11.7% of the total votes and dropped out of the race.

Francis Suarez, Mayor of Miami is also on the way to make the city “Crypto Capital of the World” and this is the reason Adams announced Miami as the rival in the race. Miami also hosted the Bitcoin 2021, the biggest annual crypto conference this year where the significant announcement of adoption of bitcoin as a legal tender in El Salvador was made by Nayib Bukele, Salvadoran President who successfully created history and El Salvador became the first country to adopt bitcoin as a legal tender recently.

Adams also very confidently challenged Miami on Tuesday by saying, “Miami, you had your run, we’re bringing our businesses back!”