Amid fierce backlash from citizens of the state of New York, the New York Police Department (NYPD) has terminated its contract with Boston Dynamics, an American engineering and robotics design company. It has also cancelled the training of Digidog, a four-legged robot dog developed by the company for the NYPD’s use amid widespread criticism for its use of supposedly dystopian technology. The now-scrapped deal was worth $94,000.

John Miller, the NYPD’s deputy commissioner for intelligence and counterterrorism, stated that the decision to include Digidog in the police force was largely a result of misinformation, and was a casualty of politics. The use of language and common catchphrases was used to denote the Digidog as harmful, with much of people’s concern aimed particularly at its “creepy” appearance.

The NYPD had begun to lease the machine in 2020, with the aim being to help the police and protect the lives of civilians. During its short-lived tenure, the machine was used several times as part of the trial and training process. Due to the fact that it was still in the early stages of its use, it primarily acted as a camera in potentially hostile situations.

However, several perceived the Digidog as a symbol of misplaced investment from the police and the increasing use of aggressive methods by law enforcement agencies. In response to the Digidog’s deployment, NYC Representative Alexandria Ocasio-Cortez (D-14) tweeted, “Please ask yourself: when was the last time you saw next-generation, world-class technology for education, healthcare, housing, etc consistently prioritized for underserved communities like this?” 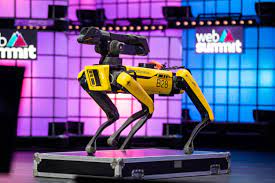 As a result, Ben Kallos, the Council member for the 5th District of the New York City Council, suggested the imposition of a law that would prohibit the police from either owning or operating similar weaponised robots. He further stated that the deployment of the Digidog is another indication of the increasingly militaristic nature of the police. Instead of increasing the number of on-duty cops and building real relationships, the police was attempting to replace this with robots.

The machine is referred to as Spot by Boston Dynamics, with the company stating that the machine was never developed for the purpose of being weaponised, as this would be a breach of their policy and terms of service. Nonetheless, it has been used in various controversial objectives. It was reported in early April that the French military was testing Spot in combat exercises, and although the company was aware of its deployment by the French army, it was in the dark when it came to Spot’s exact role. While Spot is not used as a weapon in these exercises, it is fulfilling the purpose of forward surveillance for soldiers.

Meanwhile, a spokesperson for Boston Dynamics expressed the firm’s support of locally marginalised communities and communities of colour receiving a larger portion of publicly allocated funds. It was also stated that the company believes in Spot being a cost-effective machine in regards to public safety and inspection.