Only 4 % of US iPhone users agree to app tracking after iOS 14.5

The iPhone, a line of smartphones designed and marketed by American multinational technology company Apple Inc., has announced a statement regarding its feature of app tracking. According to a survey conducted by Flurry Analytics – an American mobile analytics, monetization, and advertising company owned by Verizon Media – only 4 per cent of iPhone users in the United States running the new iOS 14.5 software chose to opt into app tracking within the first 12 days of its arrival. While this percentage did increase to 12 per cent globally, it is fairly clear that a large majority of iOS 14.5 users are rejecting this request when they receive prompts.

One cannot blame these results on the survey not being comprehensive enough, since it followed approximately 2.5 million daily active users in the US, and 5.3 million users across the world.

This news is particularly worrying for American technology conglomerate Facebook. Although it cannot be said for sure if these percentages will remain the same in the long term, the results do explain why Facebook has run newspaper ads to attack Apple’s privacy changes in the iOS 14 software. It claimed to be standing up against Apple on behalf of small businesses across the country. Facebook’s main argument was that small businesses will not be able to find and target customers with personalised ads if the iOS 14 changes are enacted. It has even suggested that companies might have to start charging money for access to their sites without previous levels of ad personalisation. Facebook’s ad can be seen below. 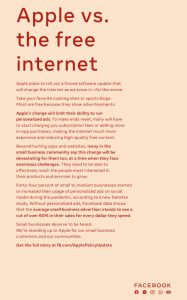 Facebook has criticised the upcoming update in Apple’s policy since it was announced in June of last year, as it would be disadvantageous for its developers and publishers at a time that is already challenging for businesses. The social network giant appears prepared to lose a major part of its iOS ad targeting data, which in turn could hurt the company’s important ad-generated revenue.

Meanwhile, Apple is not backing down against Facebook’s efforts to curb its policy changes. In fact, it sent a letter to several human rights and privacy organisations in response to Facebook’s initial criticism and condemned the social network’s business practices. On behalf of its own policy updates, Apple argued that its users deserve choice and transparency about how and when their data is collected and shared across other websites and apps. According to the company, users should also have a choice about whether or not they want to allow the activation of this feature on their own devices. Transparency regarding app tracking does not mean that Facebook will be required to change the way it tracks its users or creates personalised advertisements, but rather, only needs Facebooks to give users a choice.