In the wake of a pandemic that opened the era of closed doors and distances, the next effective plan of action is prevention. Pepticom, a Jerusalem-based drug company is using its AI toolkit to develop a drug that could treat  COVID-19. Pepticom had earlier made news for its AI powered technology which played a crucial part in the development and discovery of the novel peptide molecules. In contrast to the traditional methods of research which are time and cost consuming with a propensity for reduced accuracy, the AI powered technology deployed by the company was known for accelerating the pace of research and helping to detect the suitable peptide drug candidates, considerably reducing the number of failures in the drug trials. 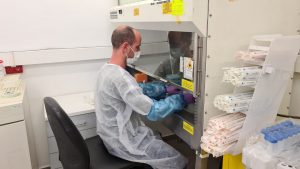 The company plans to use the same AI technology to develop a drug that could effectively treat COVID-19. The potentiality of the drug and the expectation it entails is monumental. This is evident from the fact that the new spin-off drug, PeptiCov has already raised a sum of $2.6 million in a round led by Chartered Group of Japan.

In the domain of drug development, peptides are the most promising and happening area, particularly for cancer and diabetes. One major advantage of peptide is that it is comparatively less toxic than other available treatments and hence, highly coveted. According to Zion Market Research, it is expected that the market for this highly targeted, naturally occurring proteins will witness a rise to $43 billion by 2024.

Pepticom’s AI technology is a brilliant example for how artificial intelligence can prove to be a game changer. The use of AI accelerates the identification of Peptide-based drug candidates. A massive database of possible solutions is detected by the company’s software which enables the identification of suitable peptides. This considerably reduces the risk of failures, thereby saving costs and time.

In order to find the right protein, the software searches over 1030 possible molecular options. This is an effective alternative to the traditional method which would require the scientists to check millions of molecules. With the AI approach, this number is reduced to 20,100 0r at most 3000 molecules, which is a huge win-win. Protein targets related to the SARS Cov-2 has already been identified by the company’s software. Further development of these proteins might prove to be a monumental step in the fight against the COVID-19 pandemic.

Artificial intelligence has always been caught in the ‘is it a boon or bane’ debate with varying opinions and arguments. A crucial life saving move like this can put AI in line with miracles of scientific world. And all we can do is keep the hope alive for a suitable synthesis to arise from the thesis and anti-thesis.