Peter Thiel hinted that he might know where Satoshi Nakamoto, Bitcoin’s enigmatic founder, is hiding. Thiel explained, “My sort of Satoshi identity idea was that Satoshi was on that beach in Anguilla.” According to reports, the billionaire spoke at a conference in Miami on Wednesday. 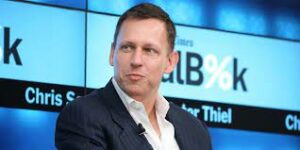 Billionaire entrepreneur Peter Thiel hinted on Wednesday that he may know where to hunt for Satoshi Nakamoto, the mysterious founder of Bitcoin, whose idea has grown into a $1 trillion asset class.

His theory is based on a discussion with the founders of E-Gold, a private digital currency that was formed in 1996 but is now outdated due to a US Justice Department indictment in April 2007.

According to Bloomberg, Thiel told a Miami conference audience that he met them on a beach in the Caribbean island of Anguilla in February 2000. That’s when they talked about integrating PayPal with E-Gold in order to “blow up all the central banks.”

According to Bloomberg, “my sort of theory on Satoshi’s identity was that Satoshi was on that beach in Anguilla”. Indeed, Thiel, the co-founder of PayPal, Palantir Technologies, and Founders Fund, believes Nakamoto was among the about 200 individuals on the beach at the time. The self-described libertarian, Nakamoto may have learned from E-Gold’s mistakes, given the way he outlined bitcoin’s use cases in his white paper, “Bitcoin: A Peer-to-Peer Electronic Cash System”.

Around Halloween in 2008, Nakamoto – who could be a single person or a group of persons – issued a paper outlining the ideas of a cryptographically secure and decentralized peer-to-peer digital payment system and then vanished. “Bitcoin was the response to E-Gold,” Thiel added, and Satoshi realized that you had to be anonymous and not have a firm. Even a corporation, even a corporate form, was too closely attached to the government.

However, not everyone supports Nakamoto stepping forward. In its prospectus, Coinbase, the largest cryptocurrency exchange in the United States, listed the unmasking of Nakamoto as a potential risk to the trading platform, claiming that it may lead to a drop in bitcoin values.

The company also stated that if Nakamoto shifted his Bitcoins – of which he is thought to have over one million – it would have a negative impact. As of this writing, the value of those coins is estimated to be around $65 billion. Thiel also appears to be averse to knowing who founded the world’s largest digital asset. “The government would arrest him if we knew who it was,” Thiel remarked.