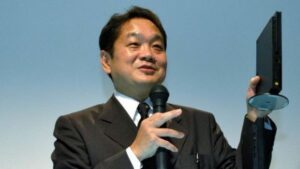 In an interview with Bloomberg, the 71-year-old gaming icon described the metaverse as appearing “quasi-real” in the virtual world, as it is now being pitched.

“Would you rather be a polished avatar than your genuine self?” Kutaragi inquired. “It’s the same as anonymous messageboard sites.” Despite rumors that his previous company is well on its way to building a new high-performance gaming wearable, Kutaragi isn’t a fan of virtual reality headsets. “Headsets isolate you from the actual world, and that’s something I can’t agree with,” Kutaragi added. “Headsets are infuriating.”

At the same time, Kutarag is hard at work on a new company that takes a different, more practical approach to the concept of a metaverse. Ascent Robotics, Kutaragi’s new startup, aims to develop systems that can help translate real-world items into computer-readable data. In practice, this entails creating robots and programming them using the software.

The business shows off a robotic arm rapidly and correctly taking components out of a tray in a video for its “Ascent Pick” device. The company claims that its systems can function without the requirement for human tagging of things thanks to the deployment of specific AI applications.

Ascent says that its technology may “save expenses” and lead to “dramatic increases in production line productivity.” According to Bloomberg, Ascent is now targeting retail and logistics customers, with the ultimate objective of freeing humans from physical labor. Think of Elon Musk’s Tesla bot idea, but with less spandex and more practicality.

Looking ahead, Kutaragi envisions a future in which data can be generated in the real world using hologram-like pictures. Kutaragi believes that one day, buyers will be able to engage with a hologram for an e-commerce company and shop. In some ways, this seems like its own kind of metaverse, but instead of sucking individuals into a virtual world via wearables, this experience would simply export the internet to the physical world. Unfortunately, all possible futures appear to begin and conclude with advertising.

Kutaragi isn’t the only important figure in the tech industry who has questioned the metaverse’s ostensibly utopian appeal. Niantic CEO John Hanke, whose business has built some of the most fascinating modern-day augmented reality-based early metaverse, described some of the endeavors as a “dystopian nightmare” last year.

“As a society, we may hope that the world does not descend into the kind of place that inspires sci-fi heroes to seek refuge in virtual reality,” Hanke said in a statement. “Or we can work to prevent that from happening.”