On January 24th, BITBase will operate the first physical Bitcoin store in Portugal. According to digital publication ECO, this will be the first of two stores to operate in the country, coupled with the installation of many Bitcoin ATMs. 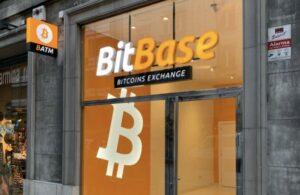 BITBase will operate the first physical Bitcoin store in Portugal

The store will debut next week in Lisbon and will be compatible with several cryptocurrency ATMs. Cryptocurrency trading is not currently regulated by the Portuguese government, but it is not prohibited either. The corporation in charge of setting up the outlets intends to replicate its business strategy in the United Kingdom and South America.

The BitBase Spaniards are getting set to open the doors to their new store in Lisbon, and are planning to open another in Porto. They’ll offer Bitcoin ATMs as well as purchase assistance.

BitBase, a Spanish business, aims to open two stores in Portugal to purchase and sell cryptocurrencies, as well as ATMs for the same reason, according to an ECO report. Outside of Spain, the first has already found a “home” at Lisbon’s Campo de Ourique. The second has not yet materialized, although it has been decided that it would take place in Porto.

The real store in Lisbon is set to open on Monday, January 24, and it will have numerous “ATM”-style machines for purchasing bitcoin and seven other cryptocurrencies. According to the company, this will be the country’s first physical cryptocurrency store.

With a “specialized team” to give “support in the purchase and selling of cryptocurrencies,” BitBase claims to help clients “take their first steps in the crypto world” in the brand’s stores. There are already 25 BitBase storefronts in 15 Spanish towns, and the company also operates a network of 149 “ATM” bitcoin boxes around the country.

According to BitBase, “there are just four digital currency distributors” in Portugal, according to statistics from the Radar Coin ATM website. This is a far lower number than in Spain, where “149 are now operational,” according to the firm. The Spanish market, on the other hand, is greater than the Portuguese market.

The company’s CEO, Lex Fernández, and COO, Adria Llorens, have stated that the company wants to expand its business model to the United Kingdom and Colombia in the future. The installation of an additional 20 “ATM” boxes in Spain is one of the company’s immediate ambitions.