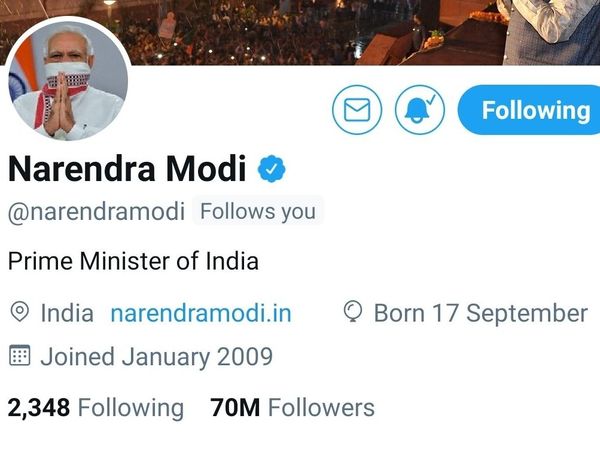 Prime Minister Narendra Modi now has over 70 million Twitter followers, making him one of the most followed active politicians on the social media network worldwide. With 53 million followers, Pope Francis is the second most popular user on the microblogging site after Modi.

Modi, who is a frequent Twitter user, updates his feed with news and happenings regularly. On International Tiger Day, he wrote on India’s tiger conservation policy.

On #InternationalTigerDay, greetings to wildlife lovers, especially those who are passionate about tiger conservation. Home to over 70% of the tiger population globally, we reiterate our commitment to ensuring safe habitats for our tigers and nurturing tiger-friendly eco-systems. pic.twitter.com/Fk3YZzxn07

Modi joined Twitter in 2009 while serving as Gujarat’s chief minister, as part of his social media outreach. He had one lakh followers in a year. The Prime Minister’s Twitter following surpassed 60 million in July 2020.

Previously, Donald Trump was the most followed active politician on Twitter, however, due to disturbances at the US Capitol, his account was permanently disabled. Before Twitter deactivated his account, the former US President had 88.7 million followers.