Drones can be used for a variety of functions. It can be used to detect the amount of damage done due to a natural calamity such as floods or forest fires. It can also be used to evacuate people by providing warning of an upcoming calamity. Additionally, drones are used to detect victims that are buried under debris due to a building or any structure collapsing. They are widely used in search and rescue missions.

Drones perform better when they are more in number. When they are flying in a swarm they are able to cover a larger amount of area and cam collect more data. This is possible because each drone can be equipped with different sensors when they are in a swarm.

The method of robots going in a swarm is very effective but is rarely used. This is due to the problem of gridlock which can occur within the swarm.

Dario Floreano who is a Professor at EPFL’s School of Engineering and also the Head of the Laboratory of Intelligent Systems (LIS) said, “In a drone swarm, when one drone changes its trajectory to avoid an obstacle, its neighbors automatically synchronize their movements accordingly.”

Adding further, “But that often causes the swarm to slow down, generates gridlock within the swarm or even leads to collisions.” 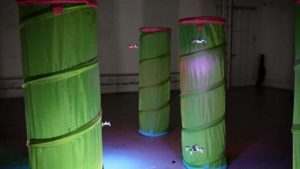 Enrica Soria who is a PhD student at LIS has now come up with a possible solution for this problem. The new method developed by her will enable the operators to get around the problem of gridlock in a swarm of drones.

This predictive control model functions by programming in simple rules such as to maintain a certain minimum distance amongst the drones while in a swarm, a set velocity to be kept or to follow specific direction. With the help of this new model developed, the drones will be less dependent on the central computer for issuing commands.

Enrica Soria says, “Our model gives drones the ability to determine when a neighbor is about to slow down, meaning the slowdown has less of an effect on their own flight.”

This predictive control model has been put through tests at LIS. Once the tests were conducted it was found out that this system improves the speed, safety and order of the drone swarms in areas that contain a lot of obstacles.

Dario Floreano says, “We don’t yet know if, or to what extent, animals are able to predict the movements of those around them.”

They added that, “But biologists have recently suggested that the synchronized direction changes observed in some large groups would require a more sophisticated cognitive ability than what has been believed until now.”

The details about this study are published in ‘Nature Machine Intelligence’. Unlike in aerial light shows where the drones get their instructions from a computer which calculates the trajectory in order to avoid collision, Enrica Soria says, “But with our model, drones are commanded using local imnformation and can modify their trajectories autonomously.”