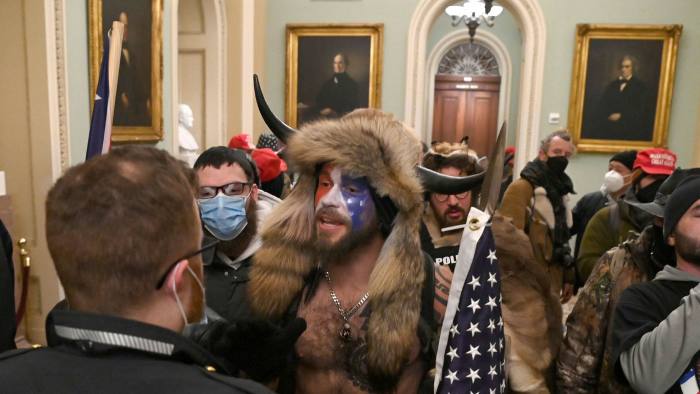 Pro-Trump Mob live-streamed the riot and storming of the Capitol using a site called Dlive. This site is gradually growing on right-users as leading social media sites Twitter, YouTube and Facebook announced the banning of Donald Trump and content related to violence or influencing it from their respective platforms.

Nationalist Tim Goinet stormed the U.S Capitol along with his fellow Trump supporters and was on a rampage of disrespect when he put his feet up on the lawmaker’s furniture in the congressional office. Pro-Trump mob live-streamed this entire event and around 16,000 people joined this live on the platform called Dlive.

He live-streamed under the name of Baked Alaska and his supporters commented and told him where to go to avoid getting captured by the police. They tipped him using a feature of lemons on Dlive that can be converted into real money. Mr. Gionet made more than $2,000 for creating a mess and imbalance in the political system.

Apart from Gionet’s channel, eight other channels were on the frontline and streamed the whole mob attack. He was earlier kicked off Twitter and also barred from YouTube for activities that were labeled violence instigating. Dlive however failed to monitor this and Pro-Trump and his loyal are fully exploiting this loophole. This live streaming mode is helping the right-wing activists by gaining supporters, earning money, and spreading hate.

Dan Bongion, another Trump supporter and a right-wing podcaster left Twitter after tweeting that it was an anti-American platform (we were rolling on the floor laughing when we read the tweet). He also informed his followers that he would open and actively using Parler for communication. It must have been a bummer for him when Parler was also announced to be booted out of Amazon, Google, and Apple and also denied AWS cloud services.

Dlive however rectified this issue on the platform and said that it has no tolerance towards any form of illegal activities and violence. It has already suspended and limited 10 accounts and deleted around 100 broadcasts. Dlive also froze the earning of these hate instigating live streamers.

In contrast to Dlive’s statement and actions taken against the right-wing supporters, they see the emergence of Dlive as a work of God for white nationalists. This site was founded in 2017 and is similar to Twitch which is an Amazon-owned online streaming site.

Many centralists and people far from political activity have observed that the platform has a lot of right-wing engagement. It is still open to interpretation whether Dlive has been supportive of these streamers because it is observed by people that the money being spent on these streamers is higher contrastingly.