Quest 2 sales edging closer to that of PSVR

Facebook’s Oculus Quest 2 has been in the spotlight ever since its release, thanks to its exemplary features and novel experience. Although the official sales figures are yet to be announced by the company, it can be discerned from the data points offered by the company that Quest 2 might be selling three times as fast in comparison to PSVR, the bestselling VR headset.

The official unit sales figures of PlayStation VR have been confidently offered by Sony thanks to its leading position in the market which has been unshakeable till now. As of January 1st, 2020, the company has hit a total of 5 million unit sales, according to the last shared data point. 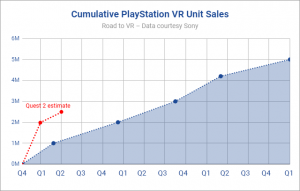 PlayStation VR and Oculus Quest 2 were released on October 13th of 2016 and 2020 respectively, which offers a rather convenient ground for comparison. The timeline is easily comparable as it takes out of the picture the variable concerning seasonal sale differences. We will get a rather on-point idea about the performance of Quest 2 in comparison to PSVR if we can get hold of the information regarding the number of Quest 2 units until now.

The data point facilitates a reasonable estimate despite the fact that Oculus is yet to offer official sales figures.

During the company’s Q4 earnings call in 2020, Facebook announced that Quest 2 was a major fuelling element behind the Q-4 non-advertising revenue worth $885 million. Adding in some assumptions and speculations to this mix, it can be discerned that around 1 million Quest 2 units might be sold in Q4, 2020.

Another useful figure is from the developers of Rec Room who provided an estimate that about 2-3 million Quest 2 units were sold in Q4.

Three months post these estimates, it is only natural to assume that the sales of the units might have been boosted by the holiday season.

Taking all these into consideration, the difference can be split between the estimates. Assuming that Q1, 2021 witnessed only 25% sales in comparison to Q4,2020, we can reach a conclusion that 2,500,000 Quest 2 units were sold through Q1,2021, which places the estimated sales of Quest 2 a notch above that of PSVR.