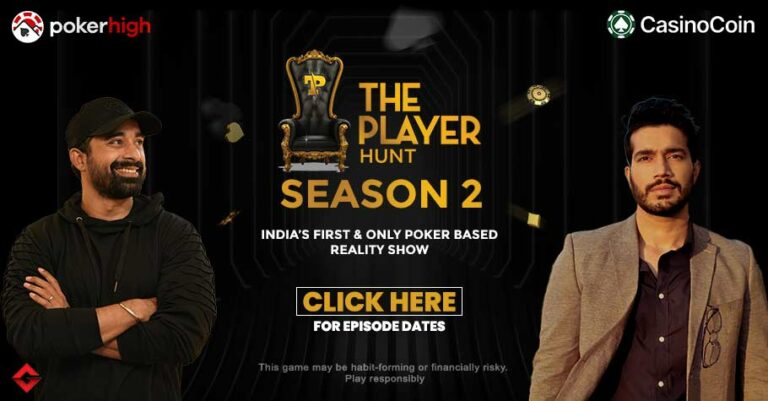 Excerpts of the interview with Rannvijay Singha, host of The Player Hunt Season 2, by Poker High.
Home
Entertainment

Excerpts of the interview with Rannvijay Singha, host of The Player Hunt Season 2, by Poker High.

Interviewer – The First season of Player Hunt, by Poker High, had an overall viewership of more than 10 million. That too when the entire season was shot through online means.

This year, in season 2, everything is reportedly offline and more boosted up. What are your expectations on viewership for the upcoming release of season 2?

Rannvijay Singha – I think fans will like season 2 as there are a lot of human interactions throughout the show. Especially as the Player Hunt is offline this time, there would be regular banter between players, which will be interesting. Funny comments, rivalry, emotions and other things will make this season more intriguing for fans.

Most of the fans enjoy both the game and the players who are participating in the tournament. As each player has their own story and experience, all of this is relatable to the fans which make The Player Hunt a more wonderful experience.

Even though Poker as a sport is the main highlight of The Player Hunt, the players who participate in the tournament and people who watch the show are also equally important.

When a player wins, he or she is not just winning a game of poker, along with that the player also gets the confidence to take up more challenges in life. Winning a tournament or a game also makes the person more credible. The Player Hunt by Poker High brings credibility to both the player and the poker sport. All of these changes the life of a person in a very immense way.

The Poker High team decided to stream season 2 of the Player Hunt through my YouTube channel which is expected to bring in a new set of viewers. We are trying to present Player Hunt to people who like spending time watching reality shows. They may or may not know the game, but the humane aspects portrayed in the reality show, such as the emotions and stories of a player will be very touching for this new set of viewers.

Interviewer – Poker as a game has been very underrated in India due to various reasons including legal and social issues. According to you how has poker and similar online games grown in India in the last few years?

Rannvijay Singha – Yes there have been various issues involved when it comes to poker in India. A few years ago, playing poker or participating in any poker sports tournament was not given that much respect or was not looked towards in India. But things have changed now.

Some card games such as poker is a game which is to be played using skills. It is not just luck or anything. The game needs very valuable skills. As poker involves skill and the winnings are based on skills alone, it is legal now in India.

The advent of the internet and increased access to the internet has also played a huge role in increasing awareness about poker. Poker players who win tournaments have become big-time celebrities with a huge fan following. These people change lives. Their family status changes and along with that community benefits largely.

A player who wins a game of poker or wins a tournament is becoming a mini brand ambassador of the poker and player hunt.

Poker as a sport is being played across the globe with huge excitement and suspense. Why can’t we bring that to India?

India is famous for its chess players and always become top in games and sports which require brains to win.

In our country, which have the best brains in the world, poker can make a lot of people successful in their areas and life. Poker can change the lives of people.

So in India, we need more infrastructure, exposure, and awareness of poker as a sport.

As poker gets more exposure and awareness in the community, society will automatically accept the sport. Poker will have more credibility in society.

Interviewer – Many people tell that poker and similar card games are completely a game of gambling with no skills involved.

What will you say to such people who say that there are no skills involved in the game of poker?

Rannvijay Singha – I will ask them to try to understand more about poker as a sport. Because these misconceptions about poker are coming from their unawareness of the sport.

We cannot blame them because they are not fully aware of poker.

If I am making some wrong statement about astronauts travelling in space, I don’t want scientists to shout at me or be angry at me. I want that person to guide me to a proper source where I can read or watch more about the topic and understand it.

Similarly, I will try to explain to that person myself about the game of poker, and for more information and understanding, he or she can just google it right. And for those who don’t like reading much, YouTube is there. All poker information is available at your fingertips.

The need for awareness and exposure to poker is very high in India. And for that more shows should be done. More interviews like this and more tournaments should be conducted. Only that way it can improve awareness about the sport of poker.

Also, if poker was just a game of luck, the people who come at the final stages of the game should always be different people, right? How can the same people with high experience and winning streaks end up in the final stages all the time?

It is because of skills and not luck that top poker players always end up coming to the final stages of poker tournaments. So definitely it is not a game of luck.

Poker involves a lot of exercising and training. It is not like a poker player party all weekend and one day just goes to play.

Interviewer – You are one of the very few notable celebrities who openly promote and encourage playing poker. With the player hunt, you take card games such as poker over to the next level of recognition.

What is the main source of inspiration to be the face and voice of the poker industry in India?

Rannvijay Singha – Poker for me is more than just a game or fun. It helped me in my personal life in a lot of ways. I love playing poker because it helps me enhance my mental ability, thinking and agility. Patience also is very important in poker.

My brother Harman Singha, who is also going to be there with me in season 2 of The Player Hunt, introduced me to the world of poker. I got attracted to the sport when I saw him playing it with his friends.

Once I started understanding poker more in detail, and I began playing it I started to feel p[passionate about it. Also once I got the opportunity to be part of the poker community and then host a reality show based on the sport, I was happy to do it.

I know everything about poker, and I have a clear idea and vision about poker, so as long as it is legal I was more than happy to be part of it and in championing the sport.

The team at Poker high and I have similar plans and visions about the poker sport. Both our ideas are very similar. We both respect each other and we have an amount of respect from the public which we have garnered over the years participating in various shows. So we came together and decided to put a show together.

Interviewer – How Poker helps people and the community?

Poker as a sport helps both individuals and the community in many ways.

For individuals, it helps them to inculcate a lot of life skills in their daily routine. It helps them develop new skills and improve the skills they already have at hand

Skills like the ability to understand the person sitting opposite to you, mental ability, thinking ability, speed, concentration, and patience all are some skills which are involved in poker and life at the same time.

In the game of poker, we sometimes have to push forward, sometimes we should play the long game and sometimes we should step back and analyse what is happening. All these help a person in many ways. These life skills, especially thinking and mental ability skills, will help people in their old age.

Whenever a player wins a game or tournament his credibility increases in society. With the help of poker, we have been able to raise more than 20 lakh rupees over the past few months which we have utilised for community welfare projects such as helping covid victims and cleaning up Mahabalipuram beach after the cyclone. We have also put the money we raised from these shows and tournaments for charity purposes also.

So every time a player wins, he gets respect and recognition, brands sign with him for advertisements or promotion, and his family proposers and that community prosper. All this just playing and winning poker.