Rectangular Robot on Wheels Designed with a Personality

Robots are getting more and more involved with humanity. The trust between humans and robots has been growing steadily since the past few decades. Robots bring with them excellent accuracy and zero error capacity while carrying out tasks which can be tough for humans. Also, they are capable of surviving in conditions which can be dangerous for humans.

With that being said one must agree that humans and robots have got a long way to go. Nowadays robots are being used in all walks of life and so far they’ve been doing a fairly good job. Not only this, robots are now being involved in the medical field as well, which is quite an interesting thing.

The Olavs Hospital went one step ahead and introduced the “Automated Guided Vehicles” which are rectangular robots on wheels. But these robots have a personality, something which sets them apart from the rest of the robots.

These robots are used to carry out various duties such as transpiration of garbage, food or medical equipment from part of the hospital to another. However, in this process they must interact with humans who are present there. The interaction can be as simple as asking them to get out of the way but instead of speaking in a standard Norwegian voice, this robot makes use of a local dialect which is quite strong and distinctive.

Researchers at NTNU are examining how the robots came to be seen as animal-like creatures and friendly and also why it matters. Roger A. Soraa is the first author of this study. He is a researcher at NTNU’s Department of Interdisciplinary Studies of Culture and Department of Neuromedicine and Movement Science. 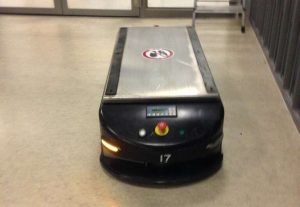 Speaking about this study and the findings derived from it, Roger A. Soraa said, “We found that these robots, which were not created to be social robots, were actually given social qualities by the humans relating to them.”

He also added that, “We tend to anthropomorphize technologies like robots—giving them humanlike personalities—so we can put them into a context that we’re more comfortable with.”

Speaking about such robots Roger A. Soraa said, “These are types of jobs that can often be dull, dirty or dangerous, or what we call 3D jobs.”

And he also added that, “These are jobs that humans don’t necessarily want to do or like to do. And those are the jobs we are seeing becoming robotized or digitalized the fastest.”

These robots are capable of driving around the hospital with the help of a predefined route. They navigate the path with help of lasers and move in between different pick up points and delivery points. At the moment there are 21 such robots which are functioning at the St. Olavs Hospital. These robots are developed by Swisslog Healthcare. The hospital began making use of these robots in the year 2006.

Roger A. Soraa said that it’s because of this local dialect the robots were accepted easily by the people, “When telling people to move out of the way, the robot will shout “Pass dæ, robottralle på vei. Æ skifte retning!” which translates as “Move away, robot trolley coming through. I’m changing direction!.”

He added that, “We found that the use of the local dialect really gave the robots more of a personality. And people often like to give non-living things human qualities to fit them within existing social frameworks.”