Technology has made our lives much easier. It saves time and energy. A lot of tasks which were tedious and time consuming are now being taken care of with the help of technology. A lot of devices which we use for daily purposes such as a grinder or a washing machine can be an example of how much technology is involved in our lives.

This semi autonomous wheelchair can be extremely useful for those who are suffering from severe motor disabilities. This system allows them to control the wheelchair’s movements despite them not being able to move their limbs. Details about the RoboEYE are published in MDPI’s journal ‘Technologies’.

The study was carried out by two researchers whose names are Alessandro Luchetti and Luca Maule. Speaking about the study and RoboEYE Alessandro Luchetti said, “Our aim was to design an innovative, cost-effective and user-friendly control system based on gaze detection for a power wheelchair to allow users with any severe motor disability to move easily and autonomously within their homes.”

Luca Maule designed the RoboEYE in collaboration with the MIRo Lab, a research team within the University of Trento’s Industrial Engineering Department which is led by Professor De Cecco. 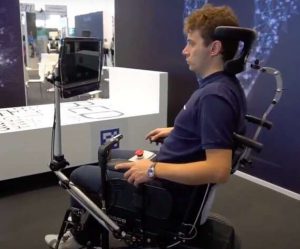 Giving a brief explanation about the functioning of RoboEYE, Luchetti and Maule said, “The most intuitive and direct modality foresees the continuous control of frontal and angular wheelchair velocities by gazing at different areas of a monitor.”

They added that, “The semi-autonomous modality, on the other hand, allows navigation toward a selected point in the environment by just pointing and activating the wished destination while the system autonomously plans and follows the trajectory that brings the wheelchair to that point.”

This semi autonomous wheelchair is eye movement controlled. It functions by combining the features of mobile robotic systems and a standard power wheelchair. This wheelchair is equipped with two different driving strategies for the users convenience in order to move around the surroundings.

One way is, the user can move around and control the wheelchair with their eye movement and the other way is to point to a desired destination. The RoboEYE wheelchair has been tested under real world experiments and in numerical simulation in order to evaluate its effectiveness.

Speaking about the benefits provided by the RoboEYE, Luchetti and Maule said that, “Compared to other solutions, RoboEYE is minimally invasive to its users, it integrates functionalities derived from the field of mobile robotics, it takes into account the role of uncertainty in human-machine interactions, and it is based on low-cost hardware solutions.”

They added that, “The result is an efficient and cost-effective system that ensures a user’s safety.”