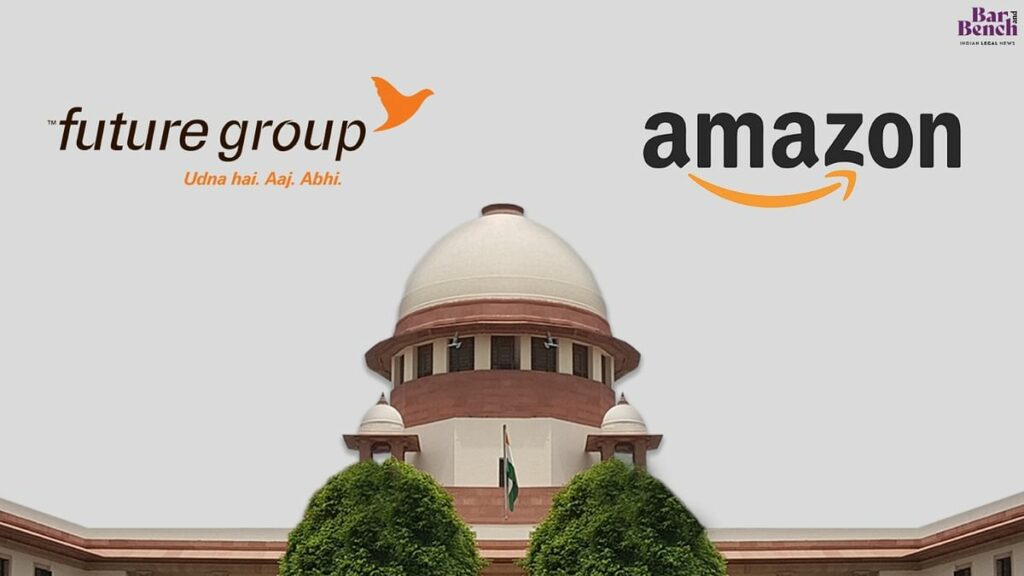 On Thursday, the Supreme Court stopped all proceedings before the Delhi High Court in Amazon’s suit seeking implementation of a Singapore emergency arbitrator’s (EA) judgment that barred the Future Group from advancing with its Rs 24,731 crore merger with Reliance Retail.

“Stay all further proceedings before the Delhi High Court and all other authorities – CCI, NCLT and SEBI – not to pass any final order for four weeks.”

The highest court has set a hearing date for the case in four weeks, pending the EA’s judgment on Future’s objection to Amazon’s proceedings.

After hearing comprehensive arguments from senior lawyers Harish Salve and Mukul Rohatgi for the Future Group and senior advocate Gopal Subramanium for Amazon, the Supreme Court issued the order.

The top court considered the parties’ submissions as well as the fact that the parties had approached the Singapore International Arbitration Centre to have the stay imposed by the emergency arbitrator lifted, and that the arguments in the case had concluded and that the order would be issued shortly.

“We think it fit to balance the interest of both the parties by staying all further proceedings before the Delhi High Court for the time being. Ordered accordingly. We further direct to all the authorities i.e. NCLT, CCI and SEBI not to pass any final order for a period of four weeks from today. This order has been passed with the consent of both the parties. List these matters after four weeks,” said the top court in its order.

On September 3, the Supreme Court said it will set a date for a hearing on Future Retail Ltd’s (FRL) new appeal against a Delhi High Court ruling directing it to carry out an earlier order prohibiting the company from proceeding with its Rs 24,731 crore merger with Reliance Retail.

Senior attorneys Salve and Rohatgi requested an early hearing on the appeal, arguing that if the apex court does not grant a stay in their favor, the High Court will proceed with the enforcement of the EA’s award.

The FRL was ordered by the high court on August 17 to comply with an earlier single-judge bench judgment prohibiting it from proceeding with the deal.

The order was issued while e-commerce behemoth Amazon sought enforcement of the award by Singapore’s EA, preventing FRL from proceeding with the deal.

The high court had remarked that it had no choice but to enforce the ruling issued by its single judge on March 18 in the absence of a stay from the Supreme Court.

A single judge bench of the high court had slapped costs of Rs 20 lakh on the Future Group and those involved with it in March, in addition to prohibiting FRL from proceeding with its merger with Reliance Retail. The judge had also ordered that their belongings be attached.

On August 6, the Supreme Court of India ruled in Amazon’s favor, affirming the Singapore EA’s decision and declaring the Rs 24,731 crore FRL-Reliance Retail merger deal to be legitimate and enforceable under Indian arbitration laws.