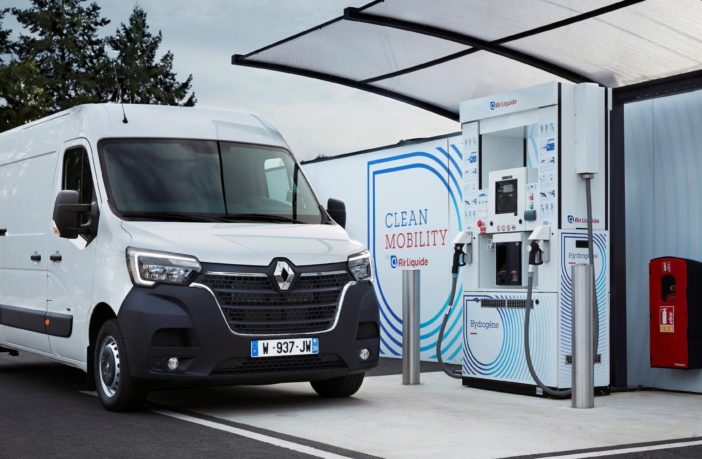 Renault says that it hopes to receive its first orders of hydrogen utilities – minibusses and vans. The vehicles are available in Netherlands and Germany for preorders, according to the head of the company’s light commercial vehicles department. As the prices are increasing, other technology has been of interest to customers, and they are hoping to catch the opportunity.

The automaker’s first fuel cell vehicle is a Master van that is expected to be launched this summer. After this, a City Bus version, Heinz- Jürgen Löw is said to be made available. The Master Chassis Cab H2-TECH has a 30kW fuel cell and also tanks containing 3kg of hydrogen. Its battery is at 33kWh. Showcasing the onboard hydrogen technology, the fuel cell, and hydrogen flows to enhance the operation. The bus can be used by businesses, local public services, also municipalities. It can carry around 15 passengers (9 sitting and 6 standing), and also has wheelchair accessibility.

As mentioned, the other is a Master Van H2-TECH. It is a large van that can transport goods and packages. It has a capacity of 12m3 cargo volume and around 500km range. It is an urban minibus that can carry at least 15 passengers and go put 300km with a single charge.

These hydrogen vehicles can be refueled in fueling stations, where the fast fueling time is 5 minutes. It is a simple process, and also increases vehicle availability. The Renault Master will be manufactured in Frane and the e-motor will be made at the Cleon plant.

Earlier on 5th May, the European Commission and 20 CEOs of companies that produce hydrogen electrolyzers committed to a tenfold increase in electrolyzer manufacturing capacities within the European Union by 2025. Their goal is to be able to produce 10 million tonnes of renewable hydrogen annually by 2030, boosting Europe’s supply of clean energy and reducing its reliance on Russian gas.

Equipped with this fuel cell, the HYVIA range of hydrogen-powered light commercial vehicles with zero CO2 emissions offers an increased range of up to 500 km and a refueling time of 5 minutes. It includes a van version with a loading volume of 12 m³ (Master Van H2-TECH), a chassis cab version with a large volume of 20 m³ (Master Chassis Cab H2-TECH), and a minibus that can carry up to 15 passengers (Master City Bus H2-TECH). It remains unclear whether people are up to using the vehicles. If their pre-order numbers increase, there is a chance that other automakers working on hydrogen cells will find this as a green signal.