Artificial Intelligence has been adding the words ease and convenience to the lives of people, within a polished framework of efficiency. A recent development in the field of artificial intelligence has opened a world of possibilities for visually impaired users, helping them to navigate through the worlds with increased ease. This intel-powered backpack is incorporated with the feature that can identify the objects around the user and call out to them.

The credit of this promising design rests in the hands of Jagadish Mahendran, an AI software developer. Computer vision programs that help robots see, has long been his working ground and the latest tool is a result of the years of research put into it.

“Last year when I met up with a visually impaired friend, I was struck by the irony that while I have been teaching robots to see, there are many people who cannot see and need help”

The statement corroborates the debate on the topic of whether AI is a blessing or threat, adding weight to the former. 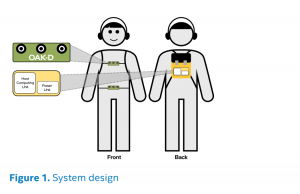 The small size of the camera is also suitable and handy to fit well inside a jacket vest, without standing out or attracting unwanted attention. According to an Intel case study,

“Three tiny holes in the vest provide viewports for the OAK-D unit, which is attached to the inside of the vest with Velcro tape.”

The resulting fanny pack, though not on point with regards to fashion, does include the ability to identify approaching objects and inform the user. The wearer is alerted about the surroundings privately, with the help of bluetooth-enabled earbuds, which is also capable of receiving commands. The incorporated battery in the system enables a time frame up to eight hours.

In contrast to the attention drawing and intriguing smart glasses or headsets, the backpack system is inconspicuous. It comes with the basic utilitarian objective of helping the visually impaired navigate the world with ease, rather than creating a fashion statement.

The details regarding the commercialization of the backpack system is still in need of clarity. The project was originally submitted to OpenCV Spatial AI competition the previous year, bagging the top prize. According to Mahendran, the future might witness him open sourcing the technology, in addition to publishing a research paper on the same.