Can AI bring dead artists back to life? 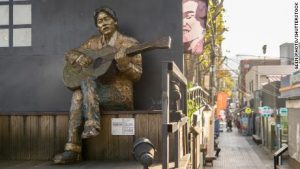 A recent development had  caused a ripple in the AI landscape. Ever since the news got out about South Korea startups using AI to create music by dead artists, the wave of excitement has not subsided. Recently, Korean national TV witnessed performance by AI bots trained in the voices of late artists, Freddie Mercury and Kim Kwang-Seok.

Supertone, a music technology startup, in January, exhibited this technological twist on arts, when it brought back to life, the voice of South Korean Folk icon, Lee Kwang-Seok who died in 1996. The overwhelmed fans bore witness to the AI bot performing I miss You, a song by Kim Bum-Soo(2002), in the voice of the folk icon. This marvel took place on the SBS based tech-entertainment TV programme, Competition of the Century: AI vs Human.

The reaction and response from the audience indicate a ready thumbs-up, reflecting the solid future of artificial intelligence in the technological domain. Here is what the CEO of Supertone, Lee Kyogu, had to say about the success of the technology,

“When I watch the reactions of these people, then we confirm that yes – this is the way we have to go and this is the future of artificial intelligence.”

The working formula behind this innovation is voice synthesis, the research on which is supposedly reaping remarkable results, opening doors of immense scope and possibility. Another segment of the programme, exhibited the potential of artificial intelligence to transcend language barriers. Thanks to the advent of artificial intelligence, the audience of the show experienced a stroke of luck as they listened to an AI bot singing a Korean song in the voice of British singer and song writer, Freddie Mercury.

However, this innovative step also comes with the inevitable burden of questions and predicaments often concerning the ethical domain and copyrights. Supertone did address this issues, assuring that it would not monetize any synthetic voice unless they had the permission and consent of the right holder. Also a suggestion was a put forth by the company about creating “virtual” celebrities, to address the possible concerns regarding royalty.

The chief producer of Competition of the Century: AI vs Human, Nam Sang-Moon, commented regarding the same,

“We should not only see the AI in a copyright category, but also think about ways to use AI technology as a tool that can help humans and make us happy.”

AI voice synthesis is not an idea exclusive to South Korea. In January, a US based Iconic Artist Group bought a controlling interest in Beach Boys’ IP. They also hinted about their plans to explore natural language processing in order to test the possibilities of actual interaction with the band.