Bitcoin has seen widespread adoption among businesses in recent years, and this time,  a UK-based fintech firm called Revolut pays for Wework’s Dallas office with Bitcoin. The office space in Dallas, Texas will house 300 staff in preparation for Revolut’s U.S. expansion, according to the business. 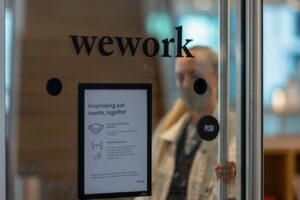 For a WeWork property in Texas, Revolut pays for WeWork’s  office in Bitcoin

Revolut, a fintech company that offers bitcoin services and intends to give the globe a “global financial super app,” announced a partnership with WeWork on September 16, 2021. Revolut will use the WeWork location at 6900 Dallas Parkway in Dallas, Texas, according to the statement. The payment for the workspace was made in bitcoin, according to Revolut (BTC).

The company said on Thursday ’’Revolut will also be WeWork’s first enterprise member to sign new space using cryptocurrency, specifically bitcoin, as it establishes its largest office yet in the U.S’’. While the move is intended to help Revolut expand in the United States, it also introduces a concept called “Revlabs real estate strategy,” according to the company. The first Revlabs location in Melbourne is officially open at the WeWork center at 222 Exhibition Street, according to the company.

According to the firm, “Revlabs will be built to foster collaboration and teamwork, with about 70 percent of office space allocated to collaboration,” as of Thursday. “The new format will accommodate rapid headcount expansion and give areas for creative thinking, brainstorming, training, and knowledge exchange – some of the face-to-face interactions that employees have missed during the pandemic,” says the statement. There will be quiet zones as well as meeting space.”

WeWork also stated that it is excited and thrilled to work with Revolut on real estate. WeWork is a commercial real estate firm based in the United States that was founded in 2010. It specializes in flexible shared workspaces, and it is used by tech startups and other businesses in the early phases of development. The corporation, however, is not without controversy, and it encountered problems in 2019 when its owner, Softbank Group, disclosed significant losses. WeWork let off over 20 percent of its staff in November of this year.

That year, the company announced that it was altering its board of directors and that it intended to replace CEO Adam Neumann with a new leader. It also intended to remove members of Neumann’s family from the board of directors. Neumann did eventually leave, with a deal worth an estimated $1.7 billion, and the corporation underwent several changes as a result.

Giraudeau stated, “WeWork is pleased to be Revolut’s global real estate partner.” “With a progressive employee-led strategy that prioritizes flexibility, cooperation, and choice, we look forward to supporting their new standard for the future of work. Growing businesses require flexibility, and by allowing cryptocurrency transactions, we can provide choice and convenience while supporting Revolut’s innovative business.”

We’re thrilled to be partnering with @RevolutApp to provide a new home for their employees in Dallas while utilizing cryptocurrency in the process to power their new flexible work strategy. #wework https://t.co/A6EJhmQXTq

What are your thoughts on Revolut becoming a real estate partner with WeWork and using bitcoin to pay for a workplace in Dallas? In the comments section below, let us know what you think about this topic.

Also read: 1 out of 10 people are crypto investors in Ireland