Rivian stock umbles below the initial IPO price as other electric vehicle makers race to gain their presence in the market. Rivian fell as low as $75.13, which is lower than the initial public offering of $78. Competing EV makers, Tesla, Lordstown, and Fisker shares have also fallen down as a result of the market share changes. The values decrease with the pressure from expectations the U.S. Federal Reserve could raise interest sooner than previously thought. 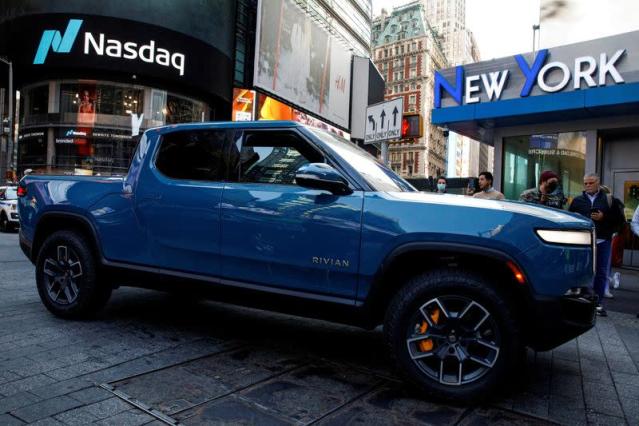 Morgan Stanley analyst Adam Jonas cautioned in a note to clients, saying, “Rivian investors need to keep near-term expectations managed. Tesla has shown us the extremely difficult path to ramping EV manufacturing. You can’t have the reward without the pain.”

Rivian’s stock has slumped about 14% since the start of Wednesday, when Amazon, one of Rivian’s biggest investors, said it teamed up with carmaker Stellantis NV. The two companies will develop cars and trucks with Amazon software and deploy electric vans made by Stellantis on Amazon’s delivery network. Rivian signed a contract in 2019 to build 100,000 electric delivery vans for Amazon by 2025. But now the electric commercial vehicle business, a vital market for Rivian, is becoming more crowded. Rivian said on Thursday it expects Amazon to buy vehicles from many providers and that its partnership with Amazon is intact. The agreements between Stellantis and Amazon, the online retailer and cloud computing power, announced in conjunction with the CES technology conference, are wide-ranging, involving software and hardware.

General Motors electric commercial vehicle business, BrightDrop, has signed deals with Walmart and FedEx, while Ford Motor is expected to deliver its E-Transit cargo van to customers this year. Meanwhile, General Motors this week unveiled its electric Chevrolet Silverado pickup, while Ford said it is ramping up production of F-150 Lightning. Both pickups would compete with Rivian’s R1T at a time it is struggling to stick to delivery dates due to chip supply constraints. Guidehouse Insights analyst Sam Abuelsamid said, “(Rivian) investors are probably getting a little spooked by the legacy industry making a comeback,”

Rivian, which lost $1.2 billion in the third quarter, is expected to deliver cars to customers this year. Production at its second plant in Georgia, in which it has invested $5 billion, is likely to begin only by 2024. Chief market strategist at StockCharts.com, David Keller said, “It’s still sort of unproven in terms of investability of that as a stock versus some of the other names like Tesla, and arguably Ford,”