Robots for Special Needs Students To Assist Children with Autism

Robots have become an integral part of a modern lifestyle. Major roles that are being played by the robots are that of assisting in various tasks and also occasional maintenance and supervision. Robots have been considered to be vital when it comes to carrying out tasks which are hazardous and tedious for the humans. With the help of latest advancements in technology such as Artificial Intelligence (AI), Virtual Reality (VR) and Augmented Reality (AR), the service provided by the robots can be considered to be irreplaceable.

Recently, the researchers at the University of Twente have found out that when primary level school children belonging to regular categories and special needs, are paired with the robot, their performance level increases significantly. This study was conducted by Daniel Davidson and Bob Schadenberg. 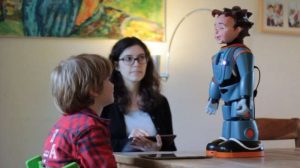 Speaking about the robot Zeno, Daniel Davidson said that, “As far as I know our Zeno robot is the first to have spent this long—four months—working independently in a classroom. Our results show that social robots have the potential not just to help educate children but to improve their mindset with regard to their own learning process and intelligence. We also saw that children returned to the robot for help with their tasks throughout the entire period, even after the initial novelty had worn off. This is a very promising result, and it paves the way for more of this kind of long-term research.”

Daniel Davidson’s robot was functioning independently at the Montessori primary school whereas Bob Schadenberg’s robot was presented at a special class for the autistic children. Schadenberg’s focus was to understand whether the robot is able to support learning processes for children with an Autistic Spectrum Disorder (ASD). His robot, the Zeno social robot was used for the purpose of providing assistance in the supervision of the children, mainly by a teacher or a therapist.

Speaking about the entire process Bob Schadenberg said, “I was there myself, too, given that my study was also about the design of the robot, which I wanted to be a close fit with the kinds of interaction suited to autistic children. The results showed that these interactions varied widely from one child to another, partly because of how autism affects the development of the individual child. The robot needs to anticipate this fact in determining how best to communicate with these children. Our results will now allow us to develop more tightly-focused robots able to take account of the differences between individual children.”

Bob Schadenberg’s used the robot Zeno social in various special needs schools at the Netherlands, the UK and Serbia. This robot was able to help the children cope with the curriculum by using an extremely simple language and would also offer alternative communication channel with the help of a tablet. Since the children were unable to understand most of the spoken language and were simply unable to speak. This robot helped them significantly in order to understand the curriculum.

There were many challenges which this robot and the team had to overcome. One such challenge was the inability of the autistic children to deal with change. Autistic children most of the time prefer to function under predictable environment. While the adults who are dealing with the children can be unpredictable, the robot, in this case, was programmed to be extremely predictable.