The Corona virus pandemic has got the world on its knees. No country seems to escape from this disaster. With that, numerous economies have suffered with unemployment and other economic problems. Medical professionals all over the world are suggesting that precautions are the best cure in this situation.

With situations looking grim for humanity, we can also see a steady increase in the involvement of robots into the medical sector. Robots have been used to serve as the first line of defence against the containment of this virus in many hospitals. Since many doctors used to be exposed to this virus through interaction with patients, many hospitals are now swapping them with robots.

Researchers at MIT and Brigham and Women’s Hospital are now using robots to measure vital signs of patients remotely in order to reduce the risk of exposure to this virus. These robots are controlled by a handheld device. These robots facilitate conversations between the doctor and the patient by carrying a tablet, while avoiding their direct contact.

Giovanni Traverso who is the senior author of this study and an assistant professor at MIT for mechanical engineering also serves as a gastroenterologist at Brigham and Women’s Hospital says, “We are thrilled to have forged this industry-academia partnership in which scientists with engineering and robotics expertise worked with clinical teams at the hospital to bring sophisticated technologies to the bedside.”

The researchers made use of ‘Spot’, which is a quadruped robot from Boston Dynamics. With the help of four cameras mounted on this robot the researchers are now able to measure pulse rate, breathing rate, skin temperature and oxygen saturation in patients. While performing all these tasks the robot is kept at a distance of two meters from the patient.

The four cameras mounted on this robot dog Spot each have a specific function to carry out. One infrared camera is used and three other are monochrome cameras which are capable of filtering different wavelengths of lights. 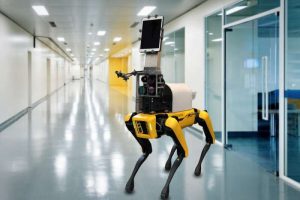 According to Henwei Huang who is an MIT postdoc, “In robotics, one of our goals is to use automation and robotic technology to remove people from dangerous jobs.”

He added that, “We thought it should be possible for us to use a robot to remove the health care worker from the risk of directly exposing themselves to the patient.”

The researchers decided to make use of existing vision technology in computer which is able to perform a number of functions such as measuring temperature, pulse, oxygen level and breathing rate, they then worked on making this technology accessible.

The researchers have developed algorithms which make it possible to use the infrared camera to measure the temperature of the skin and the breathing rate.

Henwei Huang said, “We didn’t really develop new technology to do the measurements,” Huang says. “What we did is integrate them together very specifically for the COVID application, to analyze different vital signs at the same time.”

The three monochrome cameras mounted on the robots each filter different wavelengths of light which are of 670, 810 and 880 nanometers. The algorithm developed by the researchers allows them to measure the pulse rate and the blood oxygen saturation with these cameras. A paper has been posted by the researchers on this study and can be read on techRxiv.