Nature is the best creator and there is no doubt about that. Each animal has a certain set of skills developed due to evolution which helps them function and survive in their environment. This by itself makes every species unique. Science has always been drawing its inspiration from nature when it comes to creating machines or robots.

Day after day we see advances in technology. The science sector does not seem to slow down and presents with high tech solutions for problems, big or small, faced by people. Even though science shows clear interest in studying animals for developing mechanisms inspired by them, such studies are strictly controlled and many restrictions are being put on while the experiment is carried out. This is done keeping in mind the rules of animal protection.

Now, a group of researchers from Osaka University have developed a quadruped robot platform which is capable of producing the neuromuscular dynamics of animals. The details of this study are published in the ‘Frontiers in Neurorobotics’. 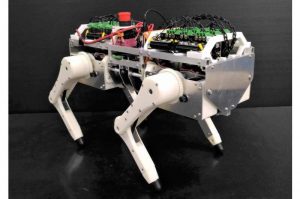 A team formed by two assistant professors Yoichi Masuda and Prof Masato Ishikawa and Toyoaki Tanikawa have developed this four legged robot. This robot is able to reproduce the motor controls of animals with the help of a computer.

This quadruped robot is equipped with highly back drivable legs which allow this robot to produce animal like flexibility and torque controllable motors. These motors help to produce the muscle characteristics just like that of an animal. Since this robot has all such qualities, it is not possible to use this robot instead of animals to carry out various experiments.

So far, the researchers thought that the steady movement and way of walking in animals was produced by complex nerve systems. However, newer research revealed that the reflex circuit alone would produce this steady way of walking in these animals.

Scientists further investigated locomotion mechanisms of cats to generate a steady walking pattern of a cat. The scientists reproduced their motor control with the help of robots and computer simulations.

Once the study was conducted, scientists derived many conclusions. When the reciprocal circuit was cut off, the robot’s gait became quite unstable. The robot was able to generate a steady walking movement by reproducing the reciprocal circuit in its legs. Whenever the mutual excitatory circuit was being simulated, it would produce a phenomenon called the ‘prolongation of the stance phase’.

Yoichi Masuda who is also the co author of the paper said that, “Gaining knowledge about animals without using experimental animals is also significant for the humans that live with them.”

The conclusions and observations derived from this research will be able to benefit both the biology field and the robotics field. It has given more and newer information to the biology field. If it is now possible for robotic animals to serve in experiments instead of real animals, it will allow the scientist to conduct experiments in more detail and derive much more accurate conclusions.

This study can prove to be fundamental in the future while developing robots which are capable of moving just like the real animals.