Rumors about Trump being back on Facebook sparks a flurry of responses from users with #DeleteFacebook trending on Twitter.

Donald Trump could be referred to as the magnet attracting any controversial news, or perhaps it has more to do with him than the news. Recently, news surfaced stating that Trump is back on social media platforms like Facebook and Instagram, and that has proved to be the kick-off point of a chain of speculations and contemplations with users urging to boycott the social media platform, adding yet another name to the trending list of Twitter. 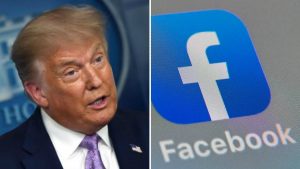 The doors to all social media platforms were closed before Trump following his controversial takes on the capital riots, and since then he has been on the silent side. However, with this latest rumor once again he has made news, and users aren’t happy.

Although the company underscores the fact that the news is just a rumor and that the former president is still indefinitely blocked from the social media platform, the users aren’t ready to calm down yet, and the fire that was sparked by a single rumor is burning strong, the heat of which is well reflected on Twitter in the form memes, responses, and jokes. After all, sarcasm never goes out of trend when it comes to hitting the right nerve, and netizens are determined to do the same.

Here is a compilation of reactions and responses from Twitter

Well, this sure gives a very good chance to attain an in-depth understanding of the word ‘irony.’

People shouting #DeleteFacebook then saying message me on Instagram and WhatsApp pic.twitter.com/l2T8xZx12h

Well, has he actually managed to ‘trump’ the odds?!

Trump trolling libs on Facebook. 😂😂😂😂
I was wondering why #DeleteFacebook is trending. 😂😂😂😂 pic.twitter.com/9zAOICOxlQ

Things are getting a bit aggressive here.

#DeleteFacebook
Don't stop there, delete Instagram and Whatsapp too.
And while you're at it, turn off CNN, MSNBC, CBS, NBC.
And tear up the NYT and WaPo.

Well, there is always scope for a new reason to get it trending.

Googling why I need to #DeleteFacebook this week 🙄 pic.twitter.com/BI3UK37gO0

And some folks are more than happy to help.

I see #DeleteFacebook is trending. Just in case you need some help. 😌 pic.twitter.com/VlHSh6ZBLU